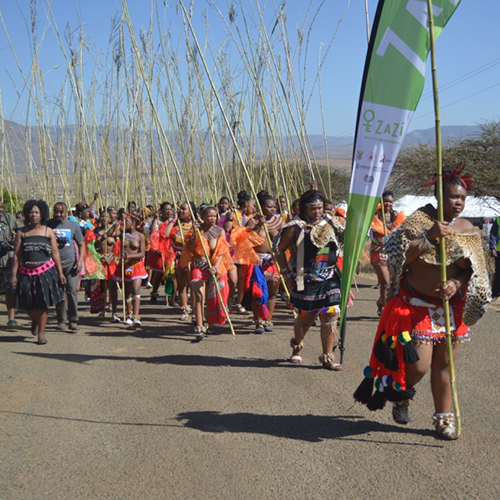 The PEPFAR-supported ZAZI (know your strength) campaign took to kwaZulu- Natal’s eNyokeni Royal Palace in Nongoma on Saturday August 31, 2013, reaching out to about 40 000 girls to promote awareness of pertinent issues affecting young girls such as delaying sexual debut, the promotion of dual protection (contraception and condom usage) and violence against women and children.

ZAZI’s participation in this year’s Reed Dance is part of an on-going collaboration supported by the U.S. Consulate in Durban between the USAID/JHU HIV Communication Program and the Bayethe Trust. At the Reed Dance the campaign advocated the ZAZI gospel, engaging and encouraging the maidens participating in the dance to draw upon their strength to inform their sexual and reproductive health decision making. In the build-up to the event, over 40 000 beaded bangles were hand crafted by local women and were handed over to maidens as a reminder of their strength and ability to make informed decisions.

The first twenty of these bangles were handed over by His Majesty King Goodwill Zwelithini in an effort to encourage parents and adult South Africans to provide young women with a green symbol to remind them to draw upon their own strength to guide their decision making. In KwaZulu-Natal, the ZAZI campaign is overseen by a steering committee with representation from the provincial Departments of Health and Social Development and supported by DramAidE.

The work with the Zulu Royal family around reaching out to women and girls within KwaZulu-Natal is led through a partnership with King Goodwill Zwelithini’s Bayethe Trust Foundation. Princess Mukelile was identified and appointed as a ZAZI Ambassador to work with girls in traditional settings to promote the values of the campaign.

Launched in May 2013, the campaign has been visiting several areas including university campuses throughout all nine of the country’s provinces, promoting the values of ZAZI.

The ZAZI Women and Girls Campaign is a joint initiative undertaken by the United States Agency for International Development (USAID) and the Johns Hopkins University (JHU) HIV Communication Program with funding from the United States President’s Emergency Plan for AIDS Relief (PEPFAR) and a range of partners including the South African National AIDS Council (SANAC), the Department of Health, and the Department of Women, Children and People with Disabilities.