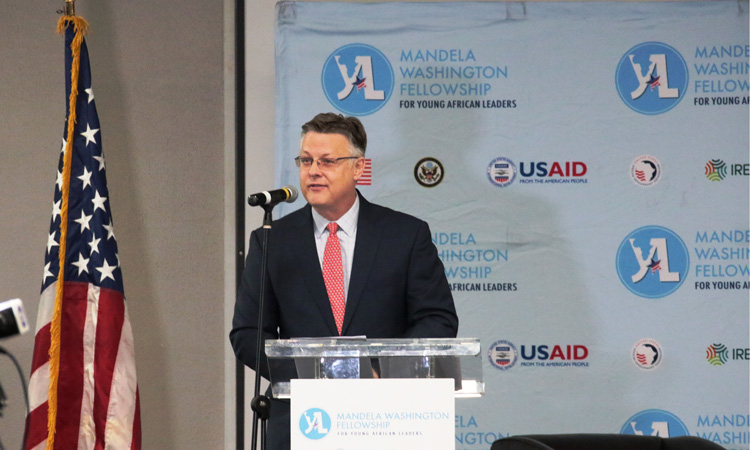 U.S. Ambassador Matthew T. Harrington, Acting Deputy Assistant Secretary of State, Bureau of African Affairs delivers remarks at the Mandela Washington Fellowship for Young African Leaders Conference, “YALI Fellows are making waves not only in Africa, but around the world.”

(JOHANNESBURG, SOUTH AFRICA) – More than 400 emerging African leaders met in Johannesburg, South Africa for the U.S. government’s Mandela Washington Fellowship for Young African Leaders Conference, June 12 – 13, 2018. In previous years, the fellowship program hosted regional conferences for each class of Fellows. This year, the decision was made to expand the conference to include all class of 2017 Fellows in one event as South Africa and the world commemorate the centenary of Nelson Mandela’s birth.

The conference provides a forum in which Fellows from 49 countries in sub-Saharan Africa learn, share, and debate the issues facing the African continent and work together to find solutions. The two-day event features panels and workshops with acknowledged experts on given topics, an exposition to showcase the Fellows’ projects and accomplishments, and a fun, cultural evening during which they demonstrate their talents.

The Mandela Washington Fellowship is the flagship program under the U.S. government’s Young African Leaders Initiative or, YALI. Several thousand high-achieving young people have graduated from the fellowship program, and many already have made significant contributions to the future of Africa.

“YALI Fellows are making waves not only in Africa, but around the world,” Harrington said.

Keynote speaker Dr. Mamphela Ramphele, Co-Founder and Global Ambassador of ReimagineSA, offered the Fellows advice based on her own experience with leadership.

“You cannot lead by talking about leadership; you lead by doing leadership,” Ramphele said.

She urged the Fellows, “Find a way to keep working together, whatever the hardship or restriction, while respecting the dignity of the oppressed.”

The Mandela Washington Fellowship  brings 700 young African professionals from across the continent to U.S. universities for six weeks of leadership training in business and entrepreneurship, civic leadership, or public management. Competitively selected for this prestigious program, the Fellows represent the continent’s emerging generation of entrepreneurs, community leaders, and public officials. Upon returning to their home countries, Fellows continue to build the skills they have developed during their time in the United States through customized programming, including access to ongoing professional development opportunities, mentoring, networking and training, and seed funding to support their ideas, businesses, and organizations.

Photos and video from the conference are available online.