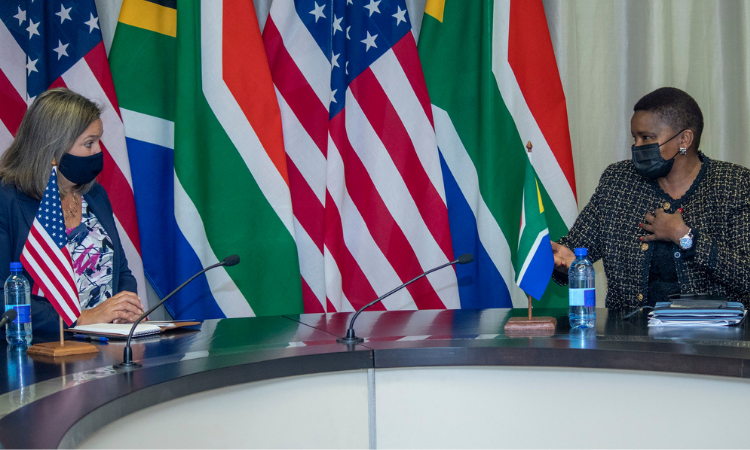 The meeting provided an opportunity for Under Secretary of State Nuland to provide a briefing on the Biden Administration’s re-engagement with the global community in general and the African continent in particular.

South Africa hosted a successful meeting of the South Africa – United States Working Group on African and Global Issues (WGAGI) on 02 August 2021, at the Department of International Relations and Cooperation (DIRCO) in Pretoria. The WGAGI was co-chaired by the Acting Director-General of DIRCO, Ambassador Nonceba Losi, and the visiting U.S. Under Secretary of State for Political Affairs Victoria Nuland.

The WGAGI, which forms part of the annual structured engagements between South Africa and the United States, focuses on Africa and global issues of common concern with a view to exploring opportunities for bilateral and multilateral collaboration. The two chairpersons hailed the resumption of the WGAGI as further indication that the bilateral relationship is growing in breadth and depth, significance and substance, including through recent engagements between the respective presidents, foreign ministers, and deputy foreign ministers, among others.

The meeting provided an opportunity for Under Secretary of State Nuland to provide a briefing on the Biden Administration’s re-engagement with the global community in general and the African continent in particular. The two delegations reinforced their commitment to working with and strengthening the African Union in light of the unique role it can play to strengthen democratic institutions, further lasting peace and security, propel economic growth, trade, and investment, and promote health security, particularly in the context of COVID-19.  They acknowledged the African Union’s valuable contribution to COVID-19 pandemic response efforts and pledged to support the African Union’s effort to prevent, detect, and respond to future pandemics. The meeting also discussed peace and security related matters in Africa, including the need for increased focus and resources for post-conflict reconstruction and development.

On the situation in Ethiopia, the two delegations acknowledged the need for all parties to commit to a negotiated ceasefire and enter into an inclusive political dialogue.  Both delegations expressed concern about the expansion of the conflict in Ethiopia and the worsening humanitarian crisis.  They called on all parties to the conflict to take immediate steps to end the violence, secure a negotiated ceasefire, facilitate the delivery of critically needed humanitarian assistance to those in need, and preserve the national unity and territorial integrity of Ethiopia.  They called on all parties to adhere strictly to their obligations under international humanitarian law, and for those responsible for violations of international humanitarian law and human rights abuses to be held accountable through independent and transparent international processes.

On recent events in Eswatini, the two delegations acknowledged that it was important to encourage all parties to refrain from violence and to engage in peaceful and inclusive dialogue with all stakeholders in the country, including political parties, women’s and youth movements, trade unions and other civil society organizations.  The two delegations expressed support for the SADC troika mechanism.

On Mozambique, the two delegations renewed their commitment to supporting the Government of Mozambique to counter terrorism and combat violent extremism with a holistic strategy that also includes socio-economic development.  They applauded the Southern African Development Community’s focus on the threat of terrorism in Mozambique, recognizing that terrorism is not an isolated problem but a regional problem.  They acknowledged the significance of the SADC deployment to Mozambique and conveyed fervent hopes for the mission’s success and for the safety of the personnel.

On the Grand Ethiopian Renaissance Dam, the two delegations expressed their support for collaborative and constructive efforts by Ethiopia, Egypt, and Sudan to reach an enduring arrangement on the filling and operation of the Grand Ethiopian Renaissance Dam.  Understanding the importance of the Nile waters to all three countries, the two delegations said they would continue to encourage a resumption of substantive and results-oriented negotiations on the GERD, under the African Union’s leadership.  They called on all parties to refrain from making any statements or taking any action that may jeopardize the negotiation process, and for all parties to commit themselves to a negotiated solution that is acceptable to all parties.  They reaffirmed their belief that the 2015 Declaration of Principles signed by the parties and the July 2020 statement by the AU Bureau are important foundations for these negotiations, and the United States is committed to providing political and technical support to facilitate a successful outcome.

The delegations further re-affirmed their common belief in the need for international solidarity and enhanced multilateral cooperation to effectively tackle the COVID-19 pandemic. They acknowledged the paramount importance of concerted action to ensure global health security, both in the face of the continuing COVID-19 pandemic as well as other health threats. South Africa welcomed President Biden’s support for a temporary TRIPS waiver at the WTO and conveyed the appreciation of the South African Government for the donation from the United States Government of approximately 5.6 million doses of the Pfizer COVID-19 vaccine as part of the Biden-Harris Administration’s global efforts to fight the COVID-19 pandemic. South Africa further acknowledged the support of the Biden Administration for the WHO and funding to the COVAX Facility to make vaccines accessible for poor and developing countries, including in Africa. South Africa also recognized that the Biden-Harris Administration has joined other governments in providing financing for vaccine production in South Africa.

The delegations expressed their mutual desire to further strengthen the strategic partnership between two counties, working together in rebuilding our economies and taking advantage of the numerous opportunities for enhanced trade, investment and business links under the aegis of the African Growth and Opportunity Act (AGOA). The U.S. delegation conveyed its support to the implementation of the African Continental Free Trade Agreement (AfCFTA), which is geared at fast-tracking the African Union’s efforts for enhanced continental integration.

The two delegations acknowledged that the future prosperity and stability of the Indian Ocean region is the collective responsibility of all nations, who must ensure that the Indian Ocean region remains a place of peaceful commerce and exchange.  They reaffirmed that the Indian Ocean Rim Association (IORA) has an opportunity to play a pivotal role – it has the right objectives and components to become a cooperative forum on shared interests of states throughout the region.  To achieve this vision, the region should first and foremost refine its objectives and build the necessary structures to foster development.  Together, these efforts could create a blueprint for a rules-based architecture that facilitates peaceful resolution of disputes, transparency, freedom of navigation, environmental safeguards, strengthened economic and people-to-people linkages, and democratic values and respect for human rights.

The parties noted the ongoing negotiations by multilateral partners aimed at achieving a mutual return to compliance with the Joint Comprehensive Plan of Action (JCPOA), and South Africa welcomed the Biden Administration’s decision to pursue these negotiations and called for the preservation and full and effective implementation of the deal.

The parties further looked forward to the meeting of the Strategic Dialogue between Minister Naledi Pandor and Secretary of State Blinken. 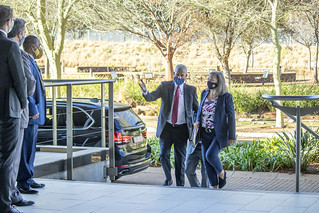