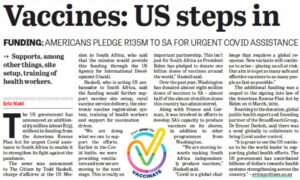 The US government has announced an additional $9 million (about R135 million) in funding from the American Rescue Plan Act for urgent Covid assistance to South Africa to enable it to strengthen its fight against the pandemic.

The news was announced to The Citizen by Todd Haskell, charge d’affaires at the US Mission to South Africa, who said that the mission would provide this funding through the US Agency for International Development (USAID).

Haskell, who is acting US ambassador to South Africa, said the funding would further support vaccine site setup, rural vaccine service delivery, the electronic vaccine registration system, training of health workers and support for vaccination drives. “We are doing what we can to support the efforts.

Earlier in the Covid battle, we were providing ventilators and now we are moving to the next stage. This is really an important partnership. This isn’t just for South Africa as President Biden has pledged to donate one billion doses of vaccines around the world,” Haskell said.

Over the past year, Washington has donated almost eight million doses of vaccines to SA – almost half of the almost 18 million doses this country has administered. Along with France and German, it was involved in efforts to develop SA’s capacity to produce vaccines on its shores, in addition to other programmes from Washington.

“We are moving towards making South Africa independently produce vaccines,” Haskell said. “Covid is a global challenge that requires a global response. New variants will continue to arise – placing us all at risk. Our aim is to get as many safe and effective vaccines to as many people as fast as possible.”

The additional funding was a sequel to the signing into law of the American Rescue Plan Act by Biden on 11 March, 2021.

Reacting to the donation, global public health expert and founding partner of the BroadReach Group, Dr Ernest Darkoh, said there was a need globally to collaborate to bring Covid under control.

“It is great to see the US continue to be the world leader in supporting global health efforts. The US government has contributed billions of dollars towards health systems strengthening across the country.” – ericn@citizen.co.za