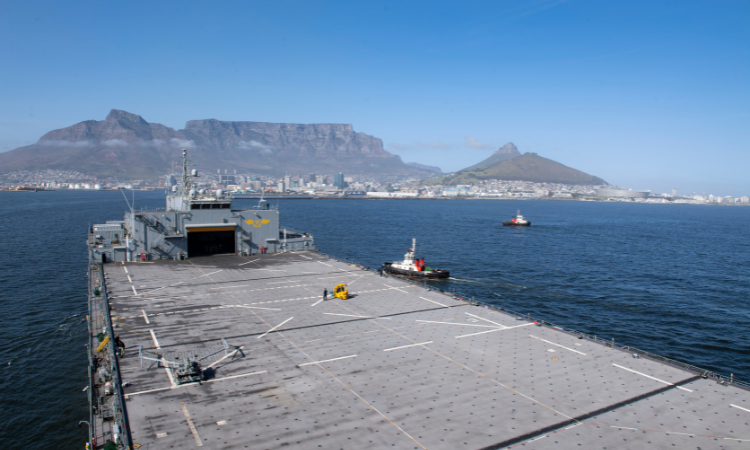 The visit will include engagement opportunities with South African government and military leaders, to include cultural presentations, ship tours, as well as religious and medical exchanges.

“It has been less than a year since the Hershel ‘Woody’ Williams was in Cape Town to work with our South African partners on issues of mutual and international interest, such as maritime security,” said Capt. Chad Graham, commanding officer, USS Hershel “Woody” Williams. “Our frequent stops in South Africa illustrate our dedication to engaging with our counterparts here strategically, but also our excitement to continue building on our two nations’ already-strong relationship through cultural exchange.”

“This week’s visit of the USS Hershel Williams is yet another indication of the deep and broad partnership between the United States and South Africa,” said William Stevens, Acting U.S. Consul General to South Africa. “This is a partnership that builds shared prosperity, saves lives, and creates security both here in South Africa and around the African continent. This USS Hershel “Woody” Williams visit is one more step in bolstering our already strong security cooperation. We at the U.S. Consulate General are delighted that Cape Town is again hosting the ship, as we firmly believe that working together to promote international security will lead to greater prosperity and security for our two nations.”

The U.S. shares a common interest with African partner nations in ensuring security, safety, and freedom of navigation on the waters surrounding the continent, because these waters are critical for Africa’s prosperity and access to global markets.

For over 70 years, U.S. Sixth Fleet forces have forged strategic relationships with our allies and partners and solidified a foundation of shared values, experiences, and vision aimed at preserving security and stability.

The ESB ship class is a highly flexible platform that may be used across a broad range of military operations. Acting as a mobile sea base, they are part of the critical access infrastructure that supports the deployment of forces and supplies to support missions assigned.

U.S. Sixth Fleet, headquartered in Naples, Italy, conducts the full spectrum of joint and naval operations, often in concert with allied and interagency partners, in order to advance U.S. national interests and security and stability in Europe and Africa.

‘Grazing in the Grass’

‘When the Saints go Marching In’