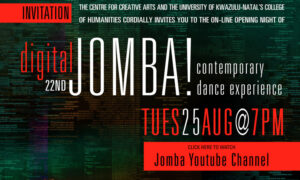 Ten dance films will be screened at the 22nd JOMBA! Contemporary Dance Experience, in a carefully curated program called USA Dance on Screen which has been supported by the USA Consulate in Durban.

The JOMBA! festival which goes digital this year is presented by the Centre for Creative Arts, University of KwaZulu-Natal, runs free of charge from 25 August to 6 September.

The USA Dance on Screen programme has been carefully curated by Lauren Warnecke, Peter Chu, Rachel Miller and Tara Aisha Willis. All four of the curators hail from across the corners of the US and have come together especially for the JOMBA! screen dance program.

“When seeking films for this project, we consciously sought out films which showcased a varied American experience both culturally and stylistically” says the curatorial statement from the curators. “Our intentions were to give a voice to those who are often unheard from and to present films that have artistic integrity, show a variety of movement styles and explorations, and have multiple ways in which an audience might “read” them. Overall, we chose films that spoke to the multitude and variety of American communities, cultural experiences, sexual orientations, and gender identities to give JOMBA! audiences a taste of the diverse landscape of American dance-makers.”

USA Dance on Screen will stream live on 30 August 30 and 6 September at 7pm. And bonus materials will be availbale on the JOMBA website. The festival runs from 25 August until 6 September off the website jomba.ukzn.ac.za.

All platforms for 2020 are free of charge and a full program is available via the website.