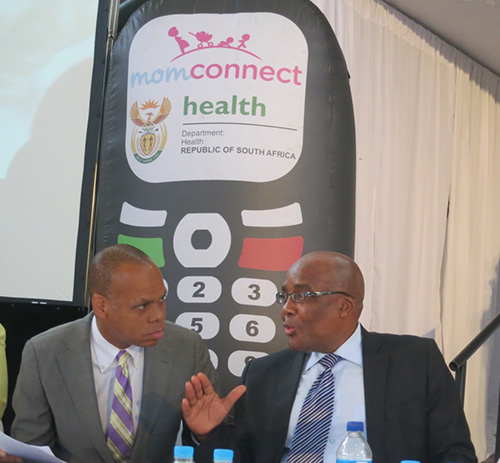 The U.S. Government, through the U.S. President’s Emergency Plan for AIDS Relief (PEPFAR) program has invested $4.9 million (R49million) towards MomConnect, a program aimed at preventing maternal mortality through the use of mobile phone technology.

With MomConnect, the South African Government expects to save more lives by following women in their communities via mobile phone text messages instead of waiting for mothers to return to clinics for health care services. MomConnect will permit all pregnant women in the public health system to be registered to receive standardized health promotion messages, reminders on their check-up updates, and reminders on taking medication.

Speaking at the high profile launch at KT Motubase Clinic in Soshanguve, north of Pretoria on Thursday August 21, 2014, U.S. Ambassador to South Africa, Patrick Gaspard said the launch of MomConnect will improved health outcomes for women and children, “It is a great pleasure and honor to be with you today to commemorate the launch of MomConnect, an interesting and exciting new innovative project that aims to use mobile phone technology to prevent HIV and improve health outcomes for women and children.”

He added that MomConnect will enable mothers to follow a specific routine for their own health and that of their unborn babies.

Ambassador Gaspard congratulated the South African health Minister, Dr. Aaron Motsoaledi on the launch, which he described as a historic moment in South Africa’s efforts to respond to HIV and improve maternal child health. He also applauded Minister Motsoaledi for his avid promotion of MomConnect among health leaders and pledged the US government’s commitment to the implementation of the MomConnect program.

“Ladies and gentlemen, I am proud to announce that through PEPFAR funding, the U.S government is investing $4.9million towards MomConnect, to ensure a successful nationwide roll-out and sustained technical assistance as the project goes to scale,” he said.

Ambassador Gaspard also mentioned that the U.S Government is committed to seeking out other innovations, supporting research to test new tools and methods, and helping to develop and utilize new technologies, to improve the response to HIV/AIDS.

Minister of Health, Dr. Aaron Mostoaledi stated that it was ideal to launch MomConnect in August, the month dedicated to celebrating and empowering women, “Today we are giving power to women for them to sustain their pregnancies, health and the health of their unborn babies”. He added that there are three major causes of maternal deaths in South Africa – HIV, Hypertension and Hypovolemia.

“In the last 3 years, 50% of women have been killed by these unfortunate diseases, and today we are happy that we have partners like the United States Government who have funded us to help fight this, through the launch of MomConnect to help save the lives of women in South Africa, thus having healthy women, healthy children as well as a healthy South Africa,” he said.

Minister Motsoaledi thanked Ambassador Gaspard and the U.S Government for tirelessly funding South Africa through PEPFAR,“Thank you very much Mr. Gaspard, the South African people are very grateful for such funding, and we have no doubt that a lot of women’s lives will be saved.”

Since 2004, the United States has invested more than $4.2billion in South Africa through PEPFAR. Through PEPFAR support, more than 2.5million individuals are receiving anti-retroviral (ARV) treatment, and more than 96% of all pregnant women are regularly being tested for HIV. Through bilateral efforts, South Africa has achieved a reduction in the transmission of HIV from mothers to their children from more than 20%, ten years ago, to less than 3% today.