Home Home / News & Events / U.S. Embassy and the Market Theatre collaborate in production of “A Raisin in the Sun” 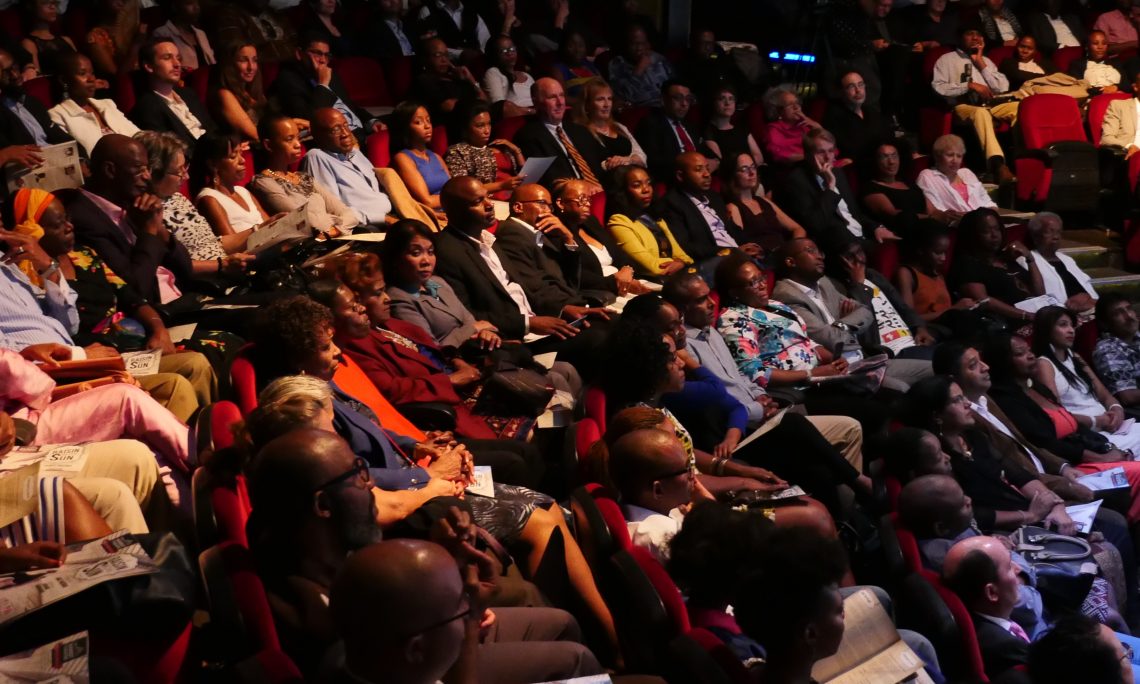 Part of the audience at 'A Raisin in the Sun ' play.

The United States Embassy provided a grant to the Market Theatre in Johannesburg to produce a month-long (23 performances) run of Lorraine Hansberry’s canonical play “A Raisin in the Sun,” a story whose significance remains relevant today.

“And it happens time and again in this extraordinary play, things are said that could be here, now, in this country – and really anywhere around the world,” wrote Pretoria News critic Diane de Beer, in her review of the production. Not only does this production mark the fourth collaboration between the Embassy and the Market Theatre, it also marks the 40th anniversary of the theater.

In her remarks, Deputy Chief of Mission Catherine Hill-Herndon said this collaboration shows beyond reasonable doubt the strong cultural ties and affinities between the United States and South Africa.

“As you might know, the month of February is ‘Black History Month’ in the United States, so the play ‘A Raisin in the Sun’ gives us an opportunity to honor the struggle and efforts of generations of African-Americans who fought for their civil rights and equal treatment under the law in the United States.”

Catherine Hill-Herndon also mentioned that this would be the South African premiere of this play (and of Hansberry), and will be a seminal piece in the Market Theatre’s 40th Anniversary celebration. “The play is the first play written by an African American woman and the first directed by an African American director (Lloyd Richard) to be produced on Broadway.”

Kwanele Gumbi, chairperson of the Market Theatre, said the relationship and collaboration with the Embassy  as gaining strength by the day, adding that the United States and South Africa have many similarities when it comes to racial discrimination.

“A Raisin in the Sun” is a play by Lorraine Hansberry that debuted on Broadway in 1959. Much of Hansberry’s work is concerns the African struggle for liberation and their impact on the world. She died of cancer at the age of 34.

The title comes from the poem “Harlem” by Langston Hughes: “What happens to a dream deferred? Does it dry up like a raisin in the sun?”

The play tells the story of a family in Southside Chicagogoing through its everyday struggles in the squalor it calls home. Walter Lee Younger, the eldest son in this family, knows that he wants far more than life has offered him and feels trapped in this whirlwind of an existence. He knows that if things don’t change, he will not be able to even catch a breath. Lorraine explores the pain of this man, and instils the play with a sense of pathos in all the scenes between Walter and Ruth, his wife.

It is also a piece that deals with how people change with each generation, a historical document that articulates the fact that not much has changed in life, and that the questions posed a couple of decades ago are still unanswered today and the walk of those who asked those questions is not done yet.

Harlem
BY LANGSTON HUGHES
What happens to a dream deferred?

Or does it explode?