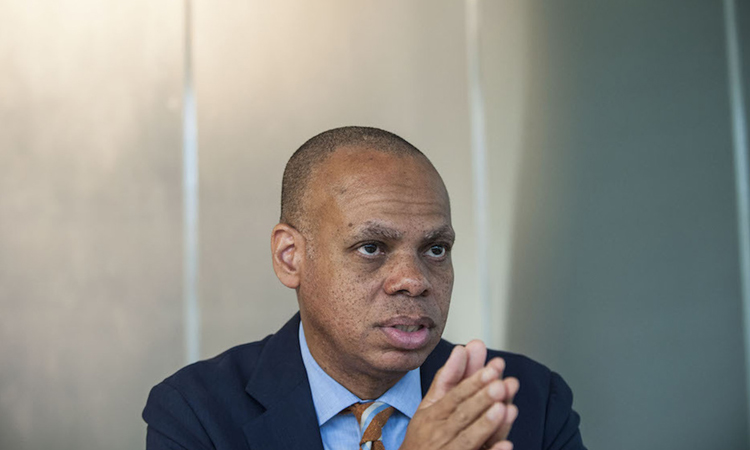 The social media savvy Patrick Gaspard talks about his love of Jo’burg and how the US can learn from SA how to discuss racism frankly.

Gaspard as diplomatic as ever
United States ambassador Patrick Gaspard swoops into a boardroom at Cape Town’s Cape Grace hotel, full of apologies for his lateness.

Gaspard, who worked for both of President Barack Obama’s presidential campaigns, was a political appointment – he is not a member of the US Foreign Service. His time in electoral campaigning has clearly left its mark, because Gaspard speaks in long, perfectly-formed sentences that could have be taken straight out of a political speech. When this is pointed out, he expresses mock horror: “That’s not good.”

He is warm and affable, but guarded.

Gaspard’s stint as US ambassador to South Africa, now stretching to three years, has arguably been more colourful than those of his predecessors. Many South Africans would probably struggle to summon to mind previous US ambassadors. Gaspard has made his mark at least partly because he is active on social media and, at times, has been unusually outspoken about South Africa’s domestic politics.

Sometimes, he has had little option in this regard. In February, ANC secretary general Gwede Mantashe told an antiracism march in Pretoria that the US Embassy was meeting daily to plot regime change in South Africa.

Gaspard chose to respond to the accusations on Twitter. “I wish that someone would invite me to these meetings. Let’s not blame others for our own challenges,” he tweeted. A subsequent tweet added: “I’m so disappointed as I always imagined that if I organised a coup it would look like Mardi Gras – food, music, dance.”

Today, Gaspard stands by his response. “One of the reasons why I actually thought it important to dismiss the claims in that fashion is because I wanted to communicate to South Africans that at this moment, given how interdependent we all are on each other … given how much more mature our trade relationship is right now, and given that there are jobs in the United States of America that are dependent on successful political and economic outcomes here in South Africa, I want my friends here to understand that there’s no benefit for the US in any turmoil, any turbulence here in South Africa.”

The ambassador speaks calmly, but there’s an edge to his words when he says he takes “personal umbrage” at the aspersions cast by Mantashe on his colleagues.

“When a party official speaks out at a public rally, or to the media, and makes what I see as wildly irresponsible claims about … hardworking staff, our team who are here in a non-partisan way acting with profound integrity,” he says. “I have to stand up and speak up for them.”

A little later, he adds: “I understand some of the paranoia that exists among some. But for mature, sophisticated leaders, heads of state, for parliamentarians, for those who have responsibilities for advancing opportunity and partnership, it’s just irresponsible to be throwing around those kinds of claims.”

Gaspard stresses the reciprocal relationship between South Africa and the US, and particularly as the two countries are still dealing with the lingering social trauma of slavery and apartheid.

At several points he says the US has much to learn from South Africa. As one example, he describes the sense of South Africans’ connection to the Constitution as inspiring. As another, he cites the South Africa’s handling of discussions about racism.

“In South Africa, y’all don’t have gentle and polite conversations about the tensions that exist between the races,” he says. “In the United States, we come up with lots of different kinds of euphemisms for these things, and sometimes it’s really hard to solve problems when you’re using euphemisms. Here it is direct and blunt and there’s nothing opaque about it, and I appreciate that – particularly as someone who came up from the rights movement in the US and always felt like we were talking past one another. Here, it’s hard to talk past one another.” Gaspard thumps his fist into his palm. “You talk right into one another.”

Ducking Donald
The former executive director of the Democratic national committee in the US is cagey on the topic of this year’s presidential election.

“Those of us who have been involved in electoral politics in the States for a very, very long time aren’t sure what [this] means, but the politics of performance, certainly at this stage in the electoral cycle, seems to be trumping the politics of principle,” Gaspard says.

He looks pleased at his “trump” pun.

Would he be comfortable serving as a US ambassador under a potential President Donald Trump?

“I tick out at the end of this [South African tenure] and that will be the end of my service,” Gaspard responds, ever the diplomat. After a pause, he adds: “I will say that I can’t imagine a scenario where I wouldn’t be proud to represent the United States of America and the interests of its 350-million people.”

Gaspard is close to the outgoing US president, Barack Obama. “I have been fortunate enough to know the president since 2004, and [we’ve] had a unique and special relationship going back some time now,” he says – but demurs when asked how frequently they are in contact. “I can turn to him for counsel on issues big and small and I understand how unique that is, and not to take advantage of that.”

Gaspard says social media has been a game-changer politically – his 18-year-old son, who will cast his ballot for the first time this year, gets most of his political information from Facebook.

Johannesburg is Gaspard’s favourite place in South Africa. He says it has an urban vibrancy that reminds him of New York City.

But he isn’t thrilled with the manner in which it is expanding.

“Everyone was excited when the Mall of Africa opened … I’m happy that there are jobs that exist because of the Mall of Africa; I’m happy maybe people have access to goods that maybe they couldn’t find as easily before, but I’m not excited about that model of development and what it does for the environment and what it does for economic development.”

Preferable, he says, would be if the mall’s shops were at street level, stretched out.

Passionate about arts and literature, the ambassador says he wishes he had more free time to spend at Johannesburg’s Market Theatre.

He’s not keen on television. Political drama House of Cards he dismisses as unrealistic. Is there a TV show Gaspard thinks better represents the machinations of Washington’s electoral politics?

“Game of Thrones,” he laughs.

Rebecca Davis is a Cape Town-based journalist, columnist and author.