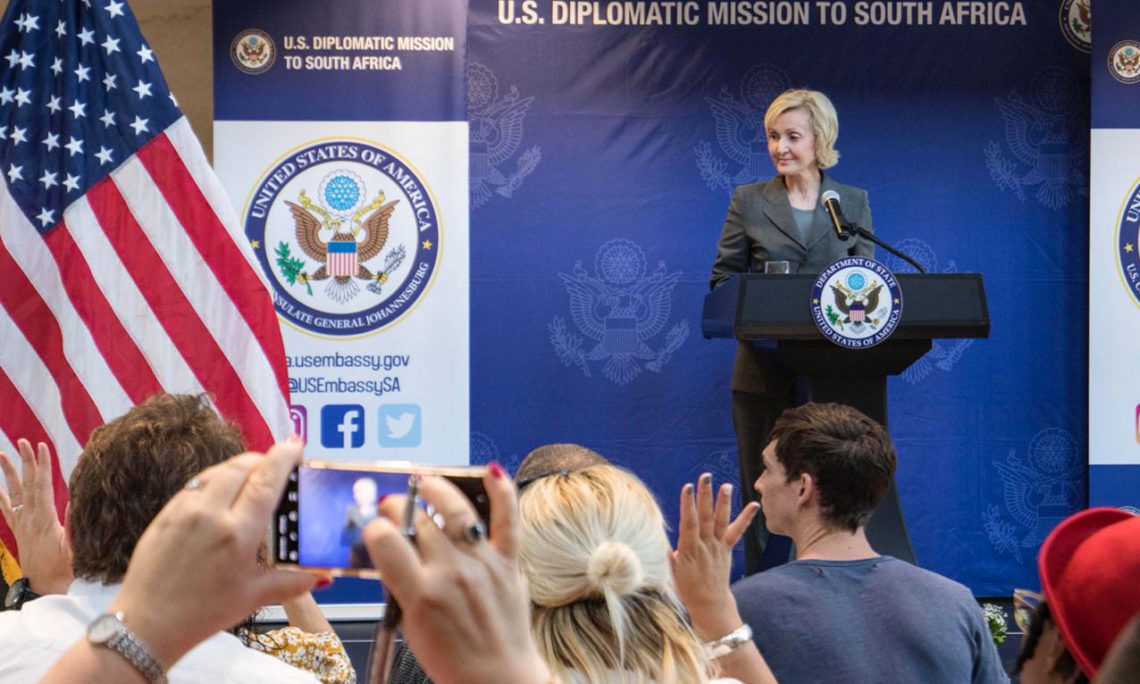 Good afternoon, and thank you all for joining me here today on what is, in effect, my first day in the office.  After flying in over the weekend and spending the last two days at the African Investment Forum, I arrived at the U.S. Embassy in Pretoria just this morning to take up my duties as U.S. Ambassador to South Africa.  I was delighted to meet the impressive team of American diplomats and South African advisors and locally-employed staff that we have here.  And, having had just about seven hours sleep since I arrived, frankly, I thought it was time to get down to business.

I have a deep admiration for the work that you do in informing the public, and an appreciation for some of the challenges and constraints that journalists face around the world.  Here in South Africa, which has a vibrant and free press, and enjoys constitutional protections for freedom of expression, we are grateful for the role that you play, and we are aware of the efforts it takes to maintain this hard-earned freedom.

I hope I can adequately convey the desire with which I wish to further cultivate the relationship the United States already enjoys with South Africa.

As you know, South Africa is the land of my birth.  When I left in the 1970s, the majority of South Africans were suffering under the brutal apartheid regime.   Twenty-five years ago, in 1994, just as I became an American citizen, South Africa was embarking upon its dramatic journey towards democracy.  To this day, I am still filled with pride at how far South Africa has come.  And though I am now an American, I feel a great kinship with the people of South Africa, to whom I will always have a special bond.

In this way, I am very excited to speak to you today about how, as Ambassador, I plan to strengthen the enduring relationship between our two great nations.  Our relationship is broad and the ties between our people go far beyond government channels.

This past month, as I was on my way to a consultation at the White House, I noticed a quote on one of the facades of the Department of Commerce that commerce defies every wind and outrides every tempest.  I could not agree more, and would wholeheartedly state that engaging and expanding trade, business, and investment between our two countries –  for the benefit of both – is one of my priorities, a cornerstone upon which everything else can be built.

South Africa is the democratic and economic leader of the world’s fastest growing continent, and I cannot emphasize in strong enough terms that the United States – our government, our businesses, our investors –  greatly values the partnership between our two nations.  The United States is already South Africa’s third largest trading partner, with two-way trade in 2018 valued at 13.7 billion dollars, or over 203 billion rand.  And, as you’ll soon learn about me, I’m not one to settle for third place.

We are the largest source of foreign direct investment, with over 600 American companies active in South Africa, which accounts for an estimated 10% of GDP and for over 200,000 jobs.  These companies employ South Africans in good jobs, allowing them to transfer skills and develop talent, which, in the long term, will improve the competitiveness of South Africa in the global economy.  Just last week, the Ford Motor Company stood alongside President Ramaphosa to break ground here in Gauteng on the new Tshwane Automotive Special Economic Zone.  This alone will generate new employment for 6,700 South Africans working in the auto supply chain, with up to 70,000 indirect follow-on jobs possible in the future.

My message for South Africa is that I am here to work with you to maximize this exciting opportunity at such a unique time.

This commitment to expanding the number of commercial deals between U.S. and South African businesses and to promoting better a business climate is exactly the aim of our new Prosper Africa initiative.  I will lead our Mission South Africa deal team as we work to play matchmaker for American firms interested in coming to South Africa and South African companies looking for access to the U.S. market.

However, all of this work would be fruitless if we did not address the on-the-ground issues affecting South Africans in the here and now.  These issues are as diverse as they are pressing, which leads me to a two-fold priority –  of epidemic control of HIV/AIDS, and of youth employment and empowerment.

For more than 15 years, the United States has partnered with the South African government to save lives and end the HIV/AIDS epidemic through the U.S. President’s Emergency Plan for AIDS Relief, or PEPFAR.  From our 144 Peace Corps volunteers working on health and education training projects, to our massive investment in HIV/AIDS prevention, our most intense area of partnership with South Africa continues to be in helping people realize their full potential at a young age, and to ensure that they can live longer, healthier, and happier lives.

Since 2004, we have invested over 80 billion Rand in South Africa to support HIV prevention and testing, linking people living with HIV to life-saving treatment.  We will be spending more than $750 million dollars this year alone, thanks to a surge of funding generously provided by the United States Congress.  Recognizing that the South African government continues to provide the vast majority of funding for the HIV response here, our support is unparalleled by any other international donor.

I will wholeheartedly continue to advocate for and work towards this crucial goal of epidemic control, doing so alongside the South African government and our heroic PEPFAR partners and clinics.

With health, we can focus on the happiness and prosperity of South Africans, which begins when they are young.  The United States already has many programs in place to promote leadership, entrepreneurship, and career development for young people.  Here in South Africa, that includes the Young African Leaders Initiative and its Mandela Washington Fellowship, as well as our partnership with the Harambee employment accelerator.  These are all great starts.  However, we can do more.  By linking in private industry, and making them fully invested in a dynamic, vibrant, and self-empowered workforce, we not only ensure the future of South Africa, but the future of many generations to come.  South Africa is unrivaled in its creativity and potential for innovation – traits that South Africa will need to cultivate and harness to grow the economy and provide opportunity for tomorrow’s leaders.

I am particularly — and personally — interested in doing what we can to help South African women realize their full professional and economic potential.  Economic growth won’t happen unless we pay special attention to educating, developing, and investing in women as empowered members of not just the workforce, but as citizens as a whole.  The United States is piloting the Academy of Women Entrepreneurs here in South Africa and, through our TechWomen program, we are bringing together emerging women leaders in science, technology, engineering, and mathematics for mentorships and exchange programs.  I will continue to advocate for women’s empowerment through these and other initiatives.

As I hope I have enunciated, America’s greatest investment in South Africa continues to be in its people.  Beyond the areas that I’ve highlighted, our partnership with the South African government runs deep.   I would like to see a continuation of cooperation on law enforcement, on defense, and security issues.  We look to support South Africa in their fight against crime, specifically violent crime, whether it be in a township or on a farm.  Our joint fight against wildlife trafficking is strong, and we’re also working to promote linkages among our universities and research institutions.  In multilateral fora, we’re already cooperating with South Africa as they continue their important role as an elected member of the United Nations Security Council, and we look forward to their leadership of African Union next year.

However, in my first weeks in this new role, I intend to listen and learn, in order to reaffirm the United States’ unwavering commitment to South Africa.  I will work with my team to build on our work, to invest in people, and to build partnerships, all of this in order to promote prosperity, security, health, jobs, skills, education, and opportunity for South Africans and Americans alike.

As I said earlier, this is an exciting time, and a unique opportunity, on the road ahead, and I am thankful to be working with President Ramaphosa and his government.  And this next phase in our relationship is one that I am proud to be leading as I represent the United States of America.