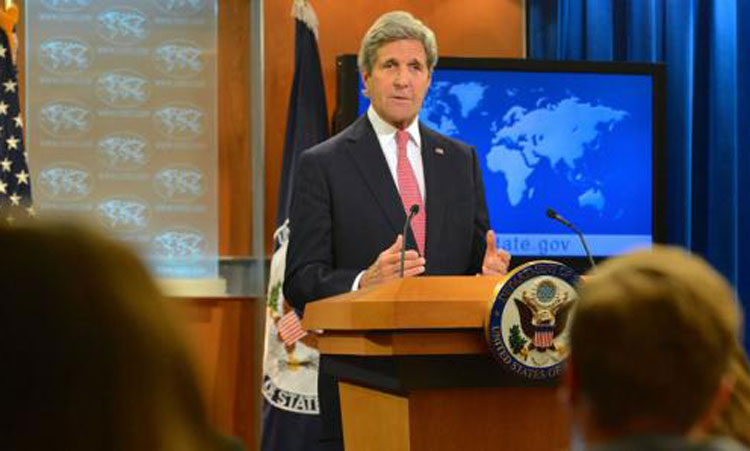 The United States released its 2015 Human Rights Reports today. The reports, now in their 40th year, document the status of human rights conditions in 199 countries and territories around the world.

In remarks to the press, Secretary Kerry discussed the reports and stressed the universality of the standards applied in the compiling of the reports, as well as the norms referred to in the document. “They’re not some arbitrary standard of the United States, which we seek to impose on people. These are universal standards of human rights that have been adopted and accepted and are agreed to by most nations in the world, and even some nations that have agreed to them but violate them. These are the international standards,” he urged.

Secretary Kerry noted that the reports represent just a fraction of the U.S. Department of State’s work to advance freedom and dignity across the globe and underscored advancing human rights is part of our agenda with every single nation as well as within the multilateral organizations to which we belong. “Not a day goes by without one or more of our officials in this department advocating on behalf of basic liberties, speaking out against corruption, pressing for the release of political prisoners, or underscoring our support for constitutional procedures and the rule of law,” he said.

Secretary Kerry gave examples where he and other officials have traveled on behalf of the United States raising specific names, cases, and individuals with leaders in countries around the world.  He cited the United States’ efforts to support civil society in Central Asia, distinguish between violent and nonviolent dissent in Egypt, and advocate for more political openness and online access in Cuba.

Secretary Kerry also noted that while not every conversation that we have on human rights bears fruit — and certainly not immediately — through steady effort, progress is possible.  He pointed to examples of the important democratic gains we have seen in countries such as Tunisia, Nigeria, Sri Lanka and Burma. He also pointed to Vietnam, as an example where the United States is leveraging the Trans-Pacific Partnership, to allow for the formation of independent trade unions for the first time – a potential significant advance for freedom of association for workers.

The most notable and widespread dramatic violations recognized in the 2015 report, Secretary Kerry observed, were in the Middle East, where the confluence of terrorism and the Syrian conflict caused enormous suffering. He discussed our support for international efforts to address human rights abuses in Syria, Iraq, and elsewhere and to ensure those responsible are held accountable for their actions. “To that end we are supporting international efforts to investigate, collect, analyze, and preserve evidence of atrocities… we are doing all we can to aid the victims of human rights abuses, including counseling and other assistance for women and girls who have endured slavery.  Third, with our partners we continue to go after Daesh, shrinking its territory, degrading its leadership, hammering its revenue sources, cutting its supply lines, and rallying the world against its genocidal actions and ideology. And finally, we are deeply committed to the search for a political solution to the conflict in Syria, including full access to humanitarian supplies, sustainment of the cessation of hostilities, the release of the most vulnerable prisoners, and a Syrian-led political transition in accordance with the Geneva Communique of 2012 and UN Security Council Resolution 2254.”

During his remarks, Secretary Kerry underscored that when it comes to human rights every government has the ability to improve, including the United States.  He reiterated, “…respecting human rights isn’t just a moral obligation; it’s an opportunity to harness the full energy of a country’s population in building a cohesive and prosperous society. And it doesn’t jeopardize stability; it enhances it. And you can measure that in country after country where human rights are respected, people are happier, people are freer to pursue their own designs, happier and freer to be artistic and creative, to be entrepreneurial, to make a difference in the building of the community.”

Originally published in DipNote, the official blog of the Department of State.