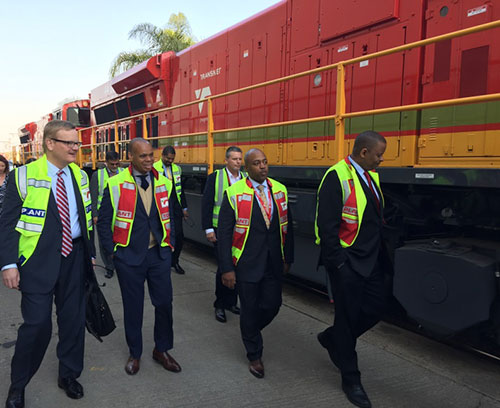 In March 2014, South Africa’s state-owned freight transport and logistics company Transnet announced that GE won a contract to produce 233 locomotives for the South African rail freight network.  This is in addition to the 143 locomotives that Transnet has ordered from GE since 2010.  The core parts of the locomotives including the engines will be made in the U.S. while assembly will take place the local facility.

The locomotives are GE’s Evolution Series and are the most advanced heavy-haul, diesel-electric locomotives in the world. GE has invested more than $500 million to develop the South African assembly facility.

Speaking at the tour, GE Transportation President and CEO Russell Stokes said the partnership with Transnet has stood the test of time. “Our partnership started seven years ago, and has since become one of our best localization case studies at GE and globally,” he said.  Stokes added that GE is committed to growing the partnership by delivering the best technology, increasing local content from 35% to 55% in the future, and more investment in human resource skills and SME development.

“To date, over 150 000 hours of locomotive assembly-related technical and nontechnical skills training have been undertaken by GE and Transnet employees, with 82 Transnet Engineering (TE) employees having received training from GE and with 382 new jobs created,” Stokes said. Furthermore,  said Stokes,  this program has benefited over 20 local BEE supply companies delivering parts to the over the past five years.

In another development, U.S. Assistant Secretary of Transport, Anthony Foxx acknowledged the US’s partnership with the rail agency and reaffirmed its commitment towards the transfer of skills and technology. “This remarkable partnership that we have with Transnet is a commitment to partnering with South Africa in broadening the innovation play in the transportation sector by providing world- class technology, such as the technology delivered by GE and Transnet.”

Secretary Foxx concluded by explaining that he was in South Africa leading a delegation of representing 14 U.S. Corporations, with the objective of bossting trade ties, “We have seen potential in South Africa, as well as in the continent, that is why we are here to strengthen trade relations between the United States and Africa as a whole,” He said.

Acting Group CEO of Transnet Siyabonga Gama applauded Transnet’s partnership with GE for its contribution towards supporting small and medium sized enterprises (SMEs). “This is what is in National Development Plan initiated by the President, and this will ensure towards building a better South Africa for all,” he said.  He added that the partnership that Transnet has with GE has made an immense contribution to the industrialization priorities of the country.

As part of the visit, the officials went through the various stages of production,  paying particular attention those phases that are part of the 35% localization commitment of the contract.