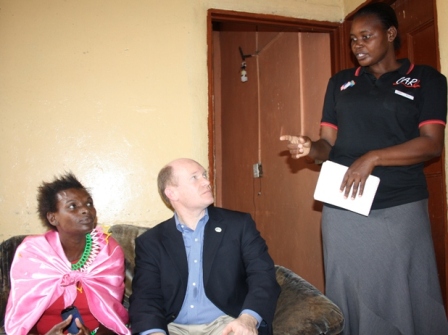 Home-based care giver Nelivia Moyo explains to Senator Coons, the condition in which she found Patricia before being given ARVs and psychological support.

“It is so inspiring to see the good work PEPFAR funding  has done in South Africa since its inception,  from saving the lives of many to empowering women about HIV/AIDS,” were the words of Senator Christopher Coons, after visiting Patricia Mabaso (40) from Soweto in February 2013.

Patricia, a mother of three children, was diagnosed with HIV in 2008. She had no money for medication, let alone support. She has Multi-Drug Resistant Tuberculosis (MDR TB), and had it not been for the home-based caregivers from NGO Care, who are funded by PEPFAR, she is convinced she would be dead by now.

Before Patricia was identified by one Nelivia Moyo, she was bedridden for months, could not move and her family members had lost hope that she would ever recuperate.

“Indeed, the funding that PEPFAR has given Care has been used to save the lives of many in this area”, she said. She added that they have been trained on how to care for terminally ill patients through the funding they received from PEPFAR.

She now has a chance of living longer, because she has been educated about HIV/AIDS.
“I thought I was going to die, but today I’m singing another tune, thanks to the home-based care-givers from Care”.

Senator Coons was full of praises for the impact PEPFAR funding is having on the lives of ordinary South Africans like Patricia;  “To actually witness a life that was almost lost due to lack of knowledge and the right medication, one tends to realize the importance of PEPFAR in South Africa”, he said.
Coons also added that not only has South Africa played a pivotal role in educating people about the virus and further saving lives, but has also put the funding from PEPFAR to very good use over the years.

In an interview Care Director Keith Malongo expressed appreciation of the U.S. government and stated that PEPFAR funding has seen Care escalating from seeing 100 people a month to 1 000 people per month.
“Ever since PEPFAR funding was introduced we have seen a remarkable difference in terms of saving lives, people having access to ARVs and most of all education and de-stigmatization of HIV/AIDS”.

Malongo further stated that they have been receiving R800,000 per year from PEPFAR funding and they have used that money to train home-based care workers, scale up health service provision, reduce stigma and increased accessibility to basic health services.