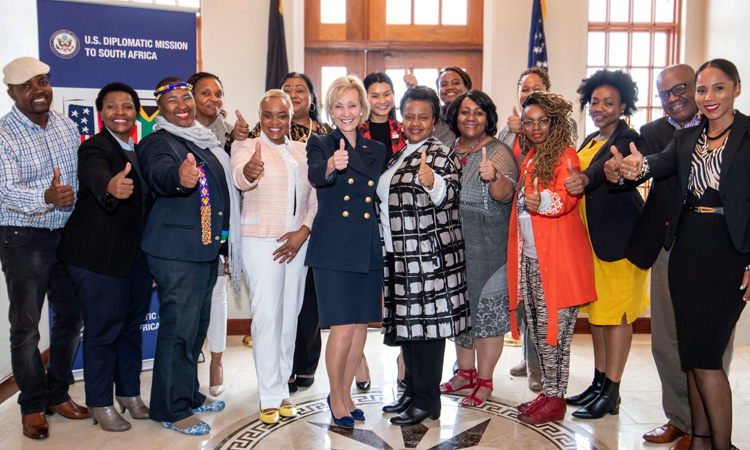 U.S. Ambassador Lana Marks and her team at the U.S. Mission in Pretoria.

As South Africa draws to the end of Women’s Month, US Ambassador Lana Marks reflects on work done – and the path ahead

The launch of this year’s Women’s Month, under the theme “Generation Equality: Realizing Women’s Rights for an Equal Future,” by Minister of Women, Youth, and Persons with Disabilities Maite Nkoana-Mashabane, reaffirms how far we have come in the pursuit of gender equality, but also how much more still needs to be done.

Indeed, this struggle has more often than not been built on the progress of previous generations, from one generation to the next. When more than 20,000 women of all races came together to protest the pass laws being extended to black women in 1956, it sparked a movement that not only fought for equality, but also inspired following generations to take the fight further, to carry forward the torch first lit by Lillian Ngoyi, Helen Joseph, Albertina Sisulu, and Sophia Williams-De Bruyn.

I consider it a great source of pride that, at the U.S. Mission in South Africa, we are South Africa’s true and unconditional partner in carrying this torch forward, supporting women’s empowerment by investing in health, education, and safety for women and girls.

In 2004, when the HIV/AIDS epidemic reached crisis level in South Africa, U.S. President George W. Bush brought the recently launched the U.S. President’s Emergency Plan for AIDS Relief (PEPFAR) to South Africa, and we have been working tirelessly with the South African government since then to reach HIV epidemic control.

The lessons of this burden, however, are not just about the HIV epidemic. It is about teaching young women that their bodies and their choices are sacrosanct, that through community and shared experience and, most importantly, education, we can not only overcome HIV, we can also effect change in the structure of the system that allows GBV to happen in the first place. And we are committed to working harder than ever.

By looking at the data, in 2016, we created an innovative program entitled Determined, Resilient, Empowered, AIDS-free, Mentored and Safe (DREAMS), which outlined a vision of helping young women overcome some of the great challenges placed in front of them. This program has been an exceptional success. Based on the continuing critical need, and thanks to the generosity of the United States Congress, we are planning a significant expansion of DREAMS in the coming year, tripling our funding to $90 million and introducing the program into twenty new districts. When young women are given the tools needed to succeed, they are empowered to make actionable change.

We are also working to help South African women reach their full potential through our wide array of educational programs and professional exchanges. One such program, Techwomen, targets professional women in the male-dominated STEM (Science, Technology, Engineering and Mathematics) fields. This program brings together the next generation of women leaders in STEM from around the world, and exposes them to female role models at some of our top American technology companies. Through a mentorship program, participants build strong networks and improve their professional capacities. We are proud to have among our Techwomen alumni the CEO of Africa Teen Geeks, Lindiwe Matlali, who teaches young girls to code, and South Africa’s first black helicopter pilot, Refilwe Ledwaba, who is passionate about reaching another young generation of women.

Indeed, we believe that mentorship is central to the empowerment of young women. Through a public-private partnership, the Fortune-U.S. State Department Global Women’s Mentoring Partnership program provides mentoring for emerging women leaders from around the world by connecting them with mentors from Fortune’s list of Most Powerful Women. These mentors include CEOs and senior executives from America’s most prestigious companies. Many talented South African women who have benefited from these programs have inspired others around them.

The scourge of gender-based violence, however, present an enormous threat to this progress. While we’ve been aware of this form of subjugation, the coronavirus pandemic has resulted in yet another pandemic — many women have been suffering even greater instances of domestic violence and assault.

Gender-based violence inherently deprives women of not just an opportunity to reach their full potential in life; it robs them of the basic tenet of a free and fair society: social justice. And I wholeheartedly commend President Ramaphosa in his call to end gender-based violence — something, on a very basic level, that exemplifies the struggle towards a more perfect democracy.

In cooperation with both the South African government and community organizations, the U.S. Government has increased resources for survivors of gender-based violence, to expand equal access to justice. Through our U.S. Agency for International Development (USAID), we support an integrated, evidence-based, and innovative program called “The Masiphephe Network” which uses a participatory approach to strengthen collaboration between local government, civil society organizations, community media houses, and the private sector — all in order to break the cycle of violence. We’ve also partnered with the Department of Social Development to train social workers at the national Gender-Based Violence Command Centre and to better equip them to counsel men at risk of committing these types of crimes.

Sixty-four years after the historic women’s march, it is clear that we have come a long way, but much more still needs to be done. Building a better society for our girls and women requires work from everyone in society: men, women, government, and the private sector among others.

Women’s Month serves as an annual reminder of the ideal that we all need to continuously work towards. But it’s our consistent, everyday actions that will carry us forward.