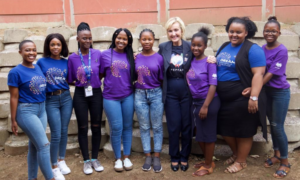 Beginning this month, the U.S. President’s Emergency Plan for AIDS Relief (PEPFAR) is significantly expanding its DREAMS program in South Africa, to ensure that the next generation of young women can grow up to be Determined, Resilient, Empowered, AIDS-free, Mentored, and Safe. DREAMS is a global partnership that aims to reduce HIV infections by not only addressing HIV as a health issue, but also confronting the structural drivers that increase HIV risk for young women, including poverty, gender inequality, sexual violence, and lack of access to education and economic empowerment.

Despite considerable progress in the HIV response, in 2015 when DREAMS was launched in South Africa, 1,475 adolescent girls and young women were newly infected with HIV each week nationwide. In 2020, over 850 adolescent girls and young women are infected each week. While we have a long way to go, empowering young women through DREAMS is working. This year, U.S. PEPFAR is nearly tripling its funding for DREAMS in South Africa, to $90 million USD (over R1.4 billion), and expanding from supporting four health districts to 24 health districts. Over the past several years in the four original DREAMS districts, there have been year-on-year reductions in new HIV infections among girls and young women aged 15-24. This success and the critical need to support the next generation of South African leaders convinced U.S. PEPFAR to invest even more in DREAMS.

The newly expanded DREAMS programs will increase support for economic strengthening, skills training, and job readiness for young women, and accelerate the availability of Pre-exposure Prophylaxis (PrEP), a proven HIV prevention method. When young women are given the tools needed to succeed, they are empowered to make actionable change in their lives and all of society benefits.

To commemorate the International Day of the Girl Child, U.S. PEPFAR virtually convened 21 inspiring young women who have participated in DREAMS programs from across the country for a listening session, to learn about the challenges they face and how DREAMS can and has helped them on their journey to adulthood. Nontembiso Mankayi, one of the participants, said, “DREAMS challenged me to set goals for myself as a young girl. As much as I want fancy things, one real fancy thing I desire now is for me as an African girl child to be given a chance to dream big without my background defining me. To be given that chance is my number one goal.”

U.S. PEPFAR, as implemented by the U.S. Centers for Disease Control and Prevention (CDC) and the U.S. Agency for International Development (USAID), has partnered with the Government of South Africa to support HIV care, treatment, and prevention since 2004, investing more than $7.25 billion (over R100 billion) in South Africa. PEPFAR remains committed to ensuring that all South Africans have the opportunity to live longer, happier, more productive lives, and to preventing new HIV infections. For more information, visit PEPFAR.gov and our website’s PEPFAR page.