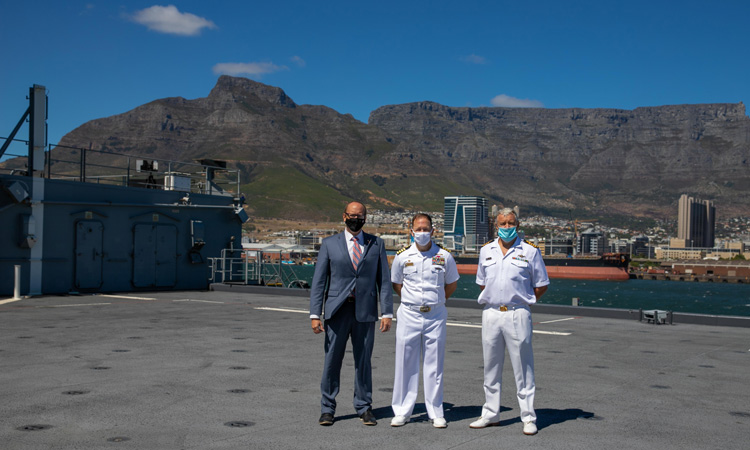 The U.S. Navy Expeditionary Sea Base USS Hershel “Woody” Williams (ESB 4) arrived in Cape Town, South Africa for a port visit, Feb. 20, 2021.  Williams is the second U.S. ship to stop in Cape Town in the last 12 months. The USS Carney last visited in March of 2020 after being at sea for thirty days. Both stops build on the global maritime partnerships with African nations and improve maritime safety and security in the region.

Acting U.S. Consul General in Cape Town, Will Stevens, joined South African defense officials and the USS Hershel’s commanding officer and crew on board the ship on February 25th and delivered these remarks:

“Captain Concannon, Captain De Wet, Distinguished members of the media. It is an honor to be here with you today.

This week’s visit of the USS Herschel Williams is yet another indication of the deep and broad partnership between the United States and South Africa. This is a partnership that builds shared prosperity, saves lives, and creates security both here in South Africa and around the African continent.

Ships like the USS Herschel Williams are the backbone of America’s commitment to contributing not just to our own security but to ensuring the world’s oceans remain free and open.

We must never take for granted the security of our seas. With over 90% of global trade traveling the world’s oceans, seaborne trade is the life blood of global trade. South Africa, as the Western gateway to the Indian Ocean, and an important continental exporter, plays a critical role in ensuring safe and secure maritime access to this region.

And let me be clear, we want to see growth in trade, not just through the U.S.’ African Growth and Opportunity Act, but also globally, such that incomes can rise and poverty can reduce worldwide. But to make that happen, we also need to protect the means of trade.

That is why the United States is eager to work with South Africa and like-minded partners in southern Africa and the broader Indo-Pacific region, to ensure this region, the Western reaches of the Indian Ocean, can be free from piracy, illegal fishing, terrorism, and other transnational threats.

Just a few weeks ago, we celebrated the launch of an official Trade and Investment Promotion Partnership between the United States and the Western Cape. This exciting new partnership will reinforce and elevate the already robust trade and investment connections between the United States and the Western Cape. I am confident that we will see increases to the already 15 billion rand in annual bilateral trade between our nations – trade that is only possible because of this secure port and the safe and secure sea lanes that surround it.

I am proud that the United States is such a strong partner for South Africa on health, trade and investment, and security. This week’s visit by the USS Williams is one more step in bolstering our already strong security cooperation, a partnership that is mutually beneficial and will lead to greater prosperity and security for both our nations.”