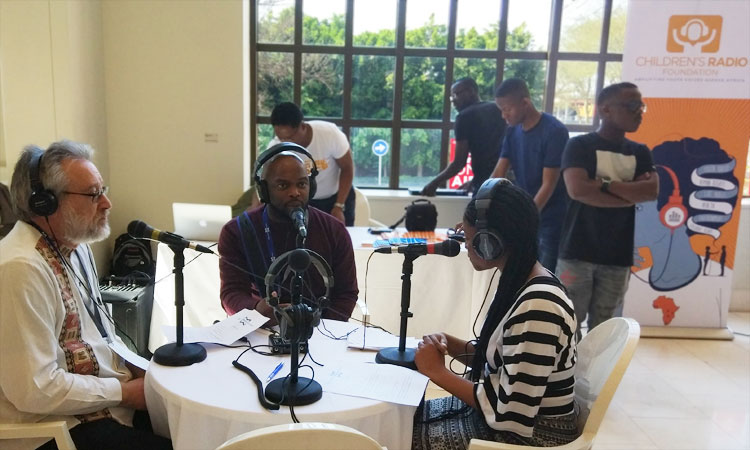 With the support of a grant from the U.S. Consulate General in Johannesburg, media practitioners from community radio stations in Gauteng had the opportunity to attend the Menell Media Exchange 2017 conference (MMX17) in Bryanston August 11-12, 2017.  Reporters and presenters from Mamelodi’s community radio station Mams FM and Alexandra Township’s Alex FM joined hundreds of reporters, producers, journalists, and presenters from commercial and public service media at the conference.  The Consulate General’s grant to U.S.-based Duke University also enabled the Children’s Radio Foundation (CRF) to share their expertise on best practices for community media, including a pop-up studio where the young reporters were able to interview leaders in the media industry.

Ntebo Mohlala, a reporter from Mams FM said: “I’ve gained so much as a young reporter from attending this conference.  I’m grateful for the opportunity I got to learn from experienced people and the confidence I gained interviewing some of them.”  Alex FM presenter Neo “Cappuccino” Dithloiso echoed Mohlala’s sentiments:  “My highlights were networking with the big players and interviewing influential people through the CRF pop-up studio.  I’m really glad I got this opportunity.”

U.S. Consul General Mike McCarthy reaffirmed the United States’ commitment to media development, noting that “community radio plays a critical role in disseminating information on everything from health care to politics across the country.  Community radio’s importance to South Africans cannot be underestimated and we are delighted to have helped MMX17 extend the reach of its programming to South African reporters who might otherwise not have benefited.  We are especially pleased to have done this in partnership with such an esteemed American university as Duke.”

The conference was one of several academic exchange and professional development programs supported by the U.S. Mission throughout the year.  These programs, sponsored by the U.S. Department of State, promote dialogue and encourage mutual understanding between Americans and South Africans.