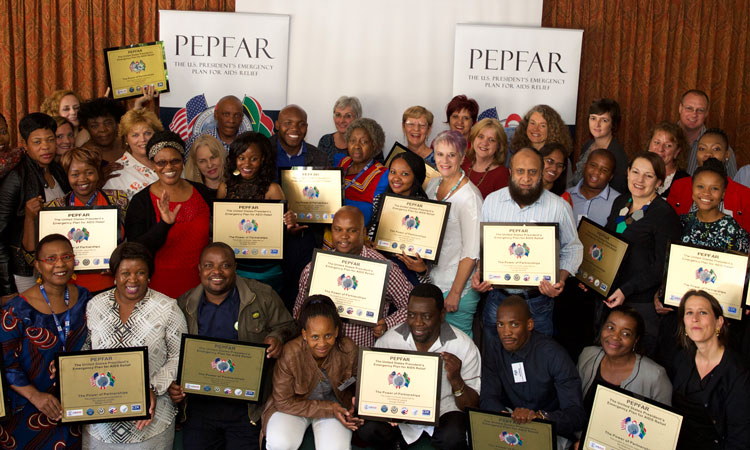 U.S. Mission to South Africa Awards Grants to Community Organizations  Partnering in the Fight Against HIV/AIDS

The U.S. Mission to South Africa hosted a HIV/AIDS Community Grants Program Awards Ceremony, culminating a multi-day workshop for 23 non-governmental organizations (NGOs) from Gauteng, Free State and North West, on September 28.  Through this community grants program, PEPFAR (the U.S. President’s Emergency Plan for AIDs Relief) will contribute $800,000 to projects led by 23 organizations seeking to combat HIV/AIDS in their communities.  They are delivering a range of essential services, such as care and support for orphans and vulnerable children, education and prevention campaigns, HIV testing and counseling mobilization, voluntary male medical circumcision mobilization, and early childhood development.

Speaking at the ceremony, U.S. Embassy Pretoria Charge d’Affaires Jessica Lapenn said to NGO leaders, “your work is helping us reach communities and touch lives.  Through our partnerships with you, we trust PEPFAR funding is having an impact on individuals and families.  You are crucial partners in the fight against HIV/AIDS.”

To prepare the organizations receiving PEPFAR-funded grants, the U.S. Mission led a capacity building workshop on September 26-28 for representatives from each NGO.  Members of the U.S. Mission’s Community Grants team reviewed PEPFAR procedures for recipients and explained both grant and reporting requirements.  Additionally, outside facilitators conducted sessions focused on topics such as sustainability and marketing.

PEPFAR is a cornerstone of the U.S. Mission in South Africa with almost $5 billion invested in South Africa over the course of the last 12 years.  The United States’ commitment to AIDS relief remains strong; not only is PEFPAR funding continuing, but it has been strengthened with an additional $67 million for DREAMS (Determined, Resilient, Empowered, AIDS-free, Mentored, and Safe women), an ambitious $385 million partnership to reduce HIV infections among adolescent girls and young women in 10 sub-Saharan African countries.  PEPFAR funding, in partnership with the South African government, is helping the country achieve remarkable milestones.  For instance, more than three million people now have access to ARV treatment, and more than 68 million people have received HIV testing and counseling services.  The HIV and AIDS Community Grants Program is a critical component of PEPFAR that helps achieve these milestones.  It reaches local communities, builds the capacity of community-based and community-driven organizations, and directly impacts the lives of those funded.