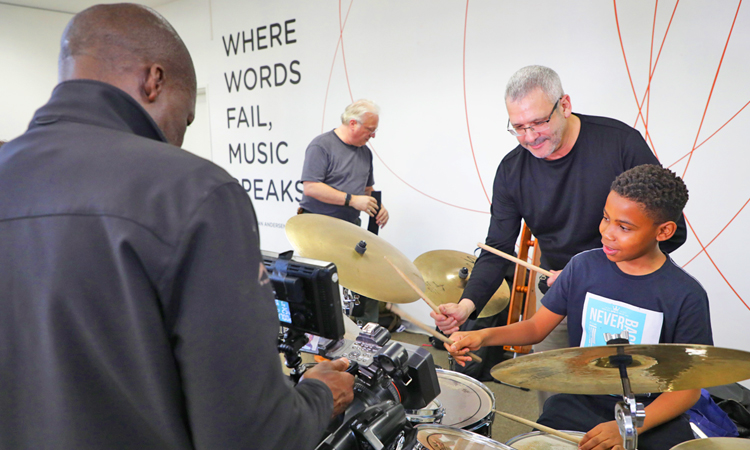 In partnership with the U.S. Embassy, The Jeff “Siege” Siegel Sextet featuring Feya Faku, conducted a series of workshop/master classes in the Pretoria and Johannesburg areas over the course of 3 days (17-19 June). The goal of the program was to promote people-to-people ties between the U.S. artists and South African audiences with jazz as a cultural bridge.

The Jeff “Siege” Siegel Sextet is comprised of men and women musicians. The group is a multi-racial and multi-cultural professional jazz group that includes four university Professors of jazz and one public school music educator.  Feya Faku, a renowned South African Jazz musician, is testament to how someone from humble origins can rise to the top of their field by dedication, discipline and talent.

Fezile ‘Feya’ Faku a trumpeter, was born in New Brighton, a South African township in Port Elizabeth.  He completed a Performers Diploma in Jazz Studies at the University of Natal, South Africa. He has been associated with some of South Africa’s classic jazz musicians including Barney Rachabang, Thandie Klaasen, Duke Makasi. and Winston ‘Mankunku’ Ngozi, Abdullah Ibrahim, and is featured in Abdullah’s latest CD; “Made in South Africa”.He has recently completed the recording of a CD for the Mahube project.  Feya’s involvement is a demonstration of his dedication to Jazz as an evolving art form, based on the understanding and appreciation of its classic form.  He also tours with the group of Johannesburg All-Stars known as “Uhadi” thoroughout the U.S.

Francesca has performed w/ such notable groups as the Billy Harper Quintet, the Erica Lindsay Quintet, the Jeff “Siege” Siegel Quartet throughout Europe, East and Southeast Asia, Scandinavia and South America as well as in the U.S.  She appears on numerous CD releases of these groups. Other leading musicians with whom Francesca Tanksley has performed include David Newman, Reggie Workman, Cecil Payne, Nick Brignola, Slide Hampton, Jay Clayton, Melba Liston & Co., Sheila Jordan, Jimmy Cobb, Clifford Jordan, Charles Davis and more.  She’s appeared at major jazz clubs and festivals in the U.S., including the Kool Jazz Festival at Carnegie Hall with Dizzy Gillespie. She’s an integral member of the Billy Harper Quintet, as well as the Erica Lindsay Quintet, Howard Johnson’s HoJo5, and the Jeff ‘Siege’ Siegel Quartet.  Ms. Tanksley is a full-time Associate Professor at Berklee College of Music in Boston.