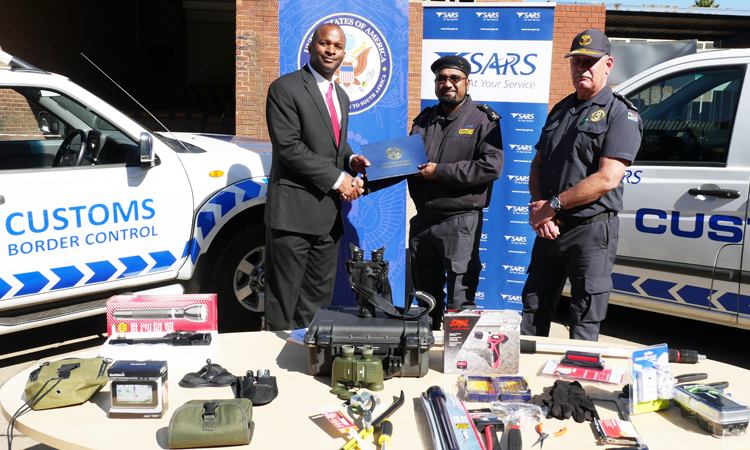 The U.S. Department of State’s Bureau of International Security and Nonproliferation (ISN) Export Control and Related Border Security Program (EXBS) funded the donation, which was executed by CBP as a part of its longstanding partnership with the government of South Africa to support border security and trade facilitation.  U.S. Chargé d’Affaires Jessye Lapenn said, “We are delighted to strengthen South Africa’s strategic trade controls and border security. which promotes non-proliferation and economic development by assuring investors that the local environment meets international standards to prevent illicit transfers.  I am proud of the great work our South African and U.S. teams have done together combatting the flow of illicit materials across borders.  Together, we are making a difference.”

Mohamed Ally, Executive for Customs at SARS said, “from the South African perspective, we acknowledge and receive these ‘tools of the trade’ from the United States with gratitude.  This donation will strengthen our long-lasting relationship with the United States, which has been assisting us since the 1990s.  Our work together has helped us improve our fight against the illicit economy.”

The EXBS Program seeks to prevent the proliferation of weapons of mass destruction and irresponsible transfers of conventional weapons by building effective national strategic trade control systems internationally.  The EXBS Program works with partner governments to identify regulatory and institutional needs and to cooperatively develop resource requirements.  The program provides a wide range of technical assistance, from executive exchanges to training workshops to the provision of detection equipment and specialized training for border control and enforcement agencies

With more than 60,000 employees, CBP is one of the world’s largest law enforcement organizations and is charged with keeping terrorists and their weapons out of the U.S. while facilitating lawful international travel and trade.  As the United States’ first unified border entity, CBP takes a comprehensive approach to border management and control, combining customs, immigration, border security, and agricultural protection into one coordinated and supportive activity.  The men and women of CBP are responsible for enforcing hundreds of U.S. laws and regulations.  On a typical day, CBP welcomes nearly one million visitors, screens more than 67,000 cargo containers, arrests more than 1,100 individuals, and seizes nearly six tons of illicit drugs.  Annually, CBP facilitates an average of more than $3 trillion in legitimate trade while enforcing U.S. trade laws.

Please find photos from the event on Flikr at:  https://flic.kr/s/aHskXdACfc