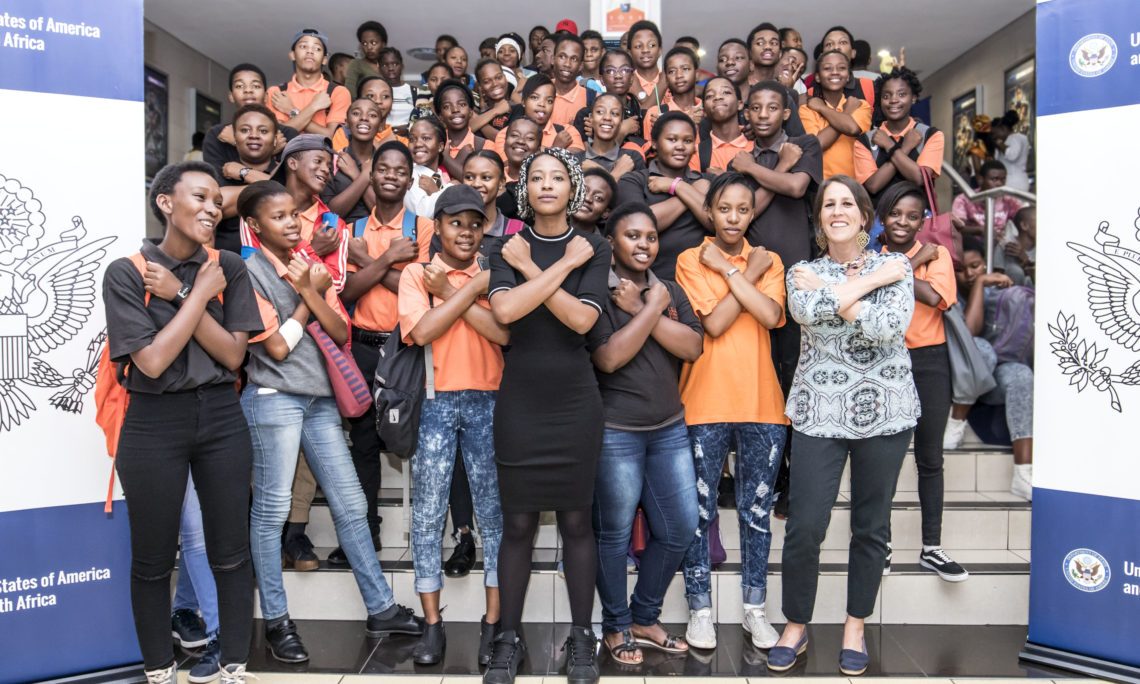 As part of a response to the #BlackPantherChallenge, an ongoing campaign to take young people to watch the inspirational Black Panther superhero film in cinema, the U.S. Mission to South Africa hosted 120 young leaders to watch a special screening of Black Panther at Brooklyn Mall on Human Rights Day, March 21.

Young leaders from the Access English Micro-scholarship program in Midrand, Mae Jemison U.S. Science Reading Room members in Mamelodi, and students from the LEAP Science School in Ga-Rankuwa, who have shown a dedication to their STEM studies, joined U.S. Mission to South Africa’s Chargé d’Affaires Jessye Lapenn for the screening.

Welcoming the excited group to the movie theatre, Chargé Lapenn said, “We invited you here today because you’ve shown great potential to make a positive difference in your lives, as well as the lives of those around you.  I encourage all of you to aspire to be superheroes — from scientists to engineers, teachers, activists and community leaders.  The sky is the limit, so set your goals high and reach them,” she said.

Mae J learners Mbalenhle and Katleho loved Princess Shuri’s wit and humor and loved how Africa was represented on screen. “I felt like I was in there [in Wakanda],” said Mbalenhle, adding, “It made me feel proud.  I’m very happy because [the characters] spoke isiXhosa.”  Katleho was excited, as many fans have been about the representation, “It was the first big movie I’ve seen to have so many black people… they were heroes, and that made me happy.”

Also in attendance was special guest Yugen Blakrok a female rapper featured on the Black Panther soundtrack, produced by Kendrick Lamar.  Yugen inspired students before the show, telling them that success doesn’t come quickly and easily, but don’t miss out on opportunities if presented.  She encouraged them to work on their craft or talents, “Learn everything you can about something you are passionate about.”

Black Panther is a celebration of Africa and the United States coming together in a film that boasts the first black Marvel superhero in a lead role.  Not only are several South African actors featured within the blockbuster, isiXhosa is the language of Wakanda, and American costume designer Ruth E. Carter was inspired by the diversity of African cultures, including Zulu and Ndebele fashion.  American hip-hop artist Kendrick Lamar featured four South African artists when he compiled the movie’s soundtrack.  This film is a great example of the blending of American and South African culture and artistic expression.

We are at the #BlackPantherChallenge screening, transporting over 100 young leaders to Wakanda! We are also excited to have @yugenblakrok , featured on the album, here as a special guest. #wakandaforever