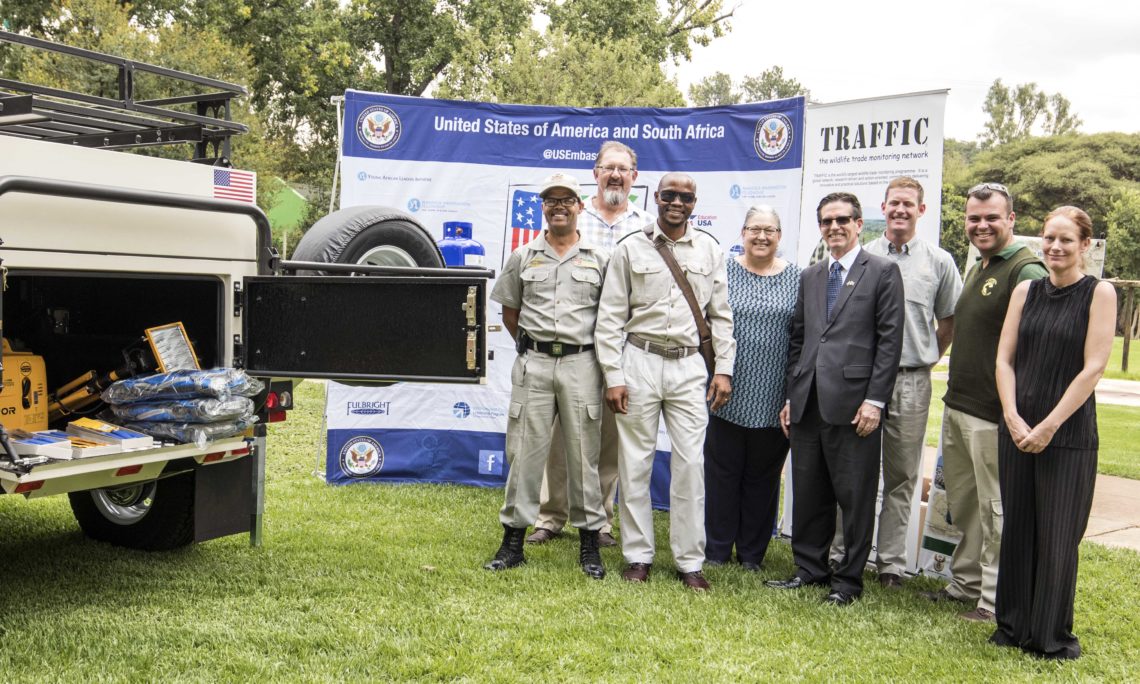 The U.S. Embassy is pleased to announce the donation of three forensic trailers to support provincial law enforcement officials to investigate wildlife crime scenes. The trailers were handed over to representatives of the Eastern Cape, Northern Cape, and KwaZulu-Natal authorities at a ceremony co-hosted with the non-governmental organization TRAFFIC on February 20, 2018, at the National Zoological Gardens of South Africa.  The United States and South Africa enjoy a strong partnership in combating wildlife trafficking and countering poaching activity to protect and preserve South Africa’s iconic wildlife species, promote economic development, and confront transnational criminal syndicates.  In recent years, the United States Government has provided millions of dollars in assistance to support the development and rollout of new technological tools, training of law enforcement officials, enhanced communication, and vitally needed equipment for rangers and investigators.

The U.S. Department of State, through the Bureau for International Narcotics and Law Enforcement Affairs, awarded a grant to TRAFFIC for $925,935 (R11 million) entitled “Cutting Wildlife Crime off at the Source.”  This grant aims to train law enforcement officials, provide specialty equipment in support of investigations, and develop a mentorship program for environmental management inspectors.  TRAFFIC, in consultation with the Department of Environmental Affairs and the U.S. Embassy, determined a need for mobile forensics trailers to be donated to three provinces in support of their wildlife crime investigations.  These trailers will carry forensic equipment to crime scenes, ensuring rangers and environmental management inspectors have the tools they need to properly collect evidence – the first step in the successful investigation and prosecution of criminals.  The handover ceremony, which was organized by TRAFFIC, included representatives from the Department of Environmental Affairs, each of the three provinces, as well as the suppliers of the trailers and associated equipment.

Speaking at the handover, Minister Counselor for Economic Affairs Alan Tousignant said: “We share mutual goals to preserve the world’s and South Africa’s rich biodiversity, to promote economic development, and to combat the multi-billion dollar illicit wildlife trade within our borders, across our borders, and globally. We do this work not just for ourselves, but for future generations, for our children, and their grandchildren.”

“As you can see by the United States’ continued commitment and support throughout the years, we are your partners in combatting wildlife trafficking and in promoting conservation. I am proud of the great work our South African and American teams continue to do together on these issues,” Tousignant added.

This is a part of the U.S. government’s ongoing support for combatting wildlife trafficking in South Africa.  For more information about U.S. Embassy programs, please visit:  za.usembassy.gov, www.facebook.com/USEmbassySA, and twitter.com/USEmbassySA.