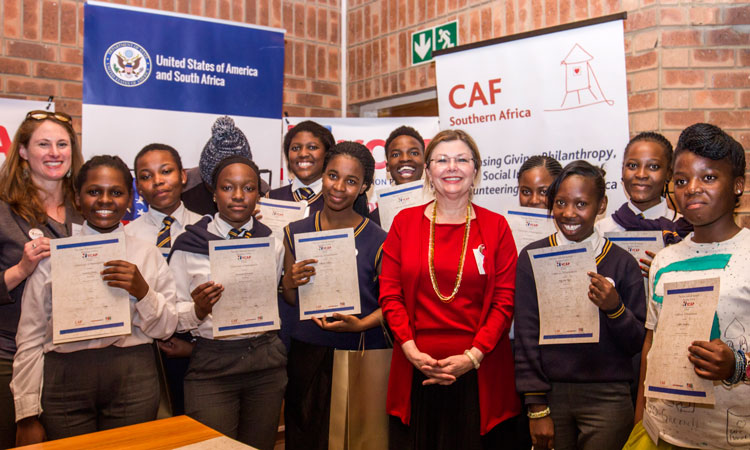 Y-CAP and Empowervate Founder Amanda Blankfield-Koseff (left) and Acting Deputy Chief of Mission at the U.S. Embassy Elizabeth McKay with one of the groups, The Eco-Green Project. This group initiated a cleanup at their school and started a recycling initiative.

Media Advisory | September 1, 2017
The U.S. Embassy recognized the achievements of a group of Mamelodi students for conceptualizing, organizing and implementing civic projects that sought to create solutions to problems within their schools and communities.  The students presented their projects to a panel of judges and received certificates during a ceremony on Tuesday, August 29, at the University of Pretoria Mamelodi campus.

The students were participants in a U.S. Embassy-sponsored program at the Mae Jemison U.S. Science Reading Room in Mamelodi, which, in partnership with Charities Aid Foundation Southern Africa (Cafsa), the Youth Citizens Action Program (Y-CAP), and Empowervate, hosted the program to develop leadership and project management skills.  Over the past three months, students have partaken in training workshops and developed projects of interest to them and their communities.  For example, the groups developed campaigns to awareness around the rights of the LGBTIQ community, started a vegetable garden to contribute to a school lunch program, and initiated a school-wide cleanup and recycling initiative.

On August 29, participants presented their projects and fielded questions from both the audience and judges at an Award Ceremony hosted by the U.S. Embassy.

Speaking at the ceremony, Acting Deputy Chief of Mission Elizabeth McKay said: “Our Mae Jemison U.S. Science Reading Room helps empower youth with the knowledge, courage and skills to make a meaningful change to better the lives of those around them.  Through this program, we have been exceptionally proud to see students create projects that will make positive change in their schools and communities.”

The participating students were from Prosperitus Secondary School, Solomon Mahlangu Freedom School, Gatang Secondary School and Ribane Laka Secondary School.  This program is one of several youth training and development programs hosted by the U.S. Embassy Pretoria throughout the year.  These programs, sponsored by the U.S. Department of State, promote dialogue and encourage mutual understanding between Americans and South Africans.