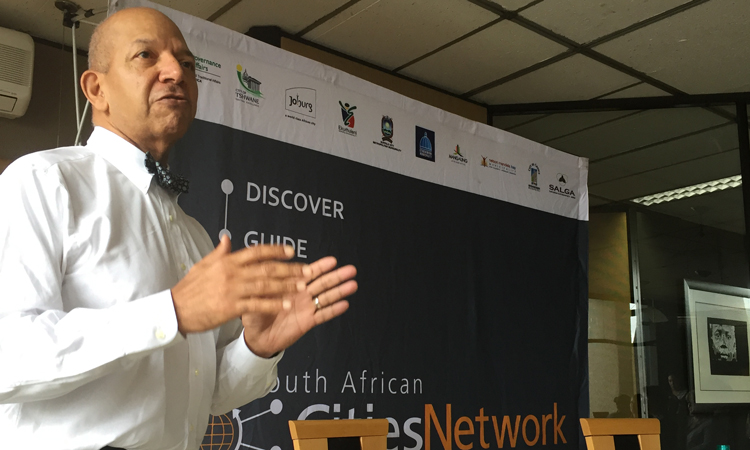 To encourage enhanced dialogue between the United States and South Africa on best practices in city management and urban revitalization, the U.S. Embassy in Pretoria hosted former Mayor of Washington DC Anthony Williams February 13-17, 2017. Mayor Williams’ visit provided an opportunity to renew the relationship between two world capitals, Washington DC and the City of Tshwane, which are sister cities.

During his five-day visit, Mayor Williams met with Johannesburg Mayor Herman Mashaba and Tshwane Mayor Solly Msimanga and conducted a range of outreach activities, including remarks at the YALI Southern African Regional Leadership Center at UNISA and the Departments of Urban Planning and Architecture of the University of Pretoria and roundtable discussions with key organizations focused on urban revitalization such as Wits City Institute, the Centre for Development and Enterprise, Gauteng Growth and Development Agency, and South African Cities Network.

Anthony Williams served two consecutive terms as Mayor of Washington DC from 1999 to 2008 and is currently the CEO of the Federal City Council, an organization focusing the creative and administrative talents of Washington’s business and professional leaders on major problems and opportunities facing the district. He is widely credited with leading the “comeback” of Washington DC during his two terms, restoring the finances of the capital and improving the performance of government agencies, all while lowering taxes and investing in infrastructure and human services.
Throughout his visit, Mayor Williams drew upon his lessons learned as a successful mayor and emphasized the importance of open governance, advising, “it is important for a leader to forge relationships…there needs to be a perception that government is open.” Mayor Williams also underscored his commitment to South Africa during this, his fifth visit to the country. “South Africa is powerful. The entrepreneurial zeal is very high. South Africans have that drive. This is a huge advantage in terms of achieving growth.”
Mayor Williams’ visit was one of several exchange and professional development programs hosted by the U.S. Embassy in Pretoria throughout the year. These programs, sponsored by the U.S. Department of State, promote dialogue and encourage mutual understanding between Americans and South Africans.