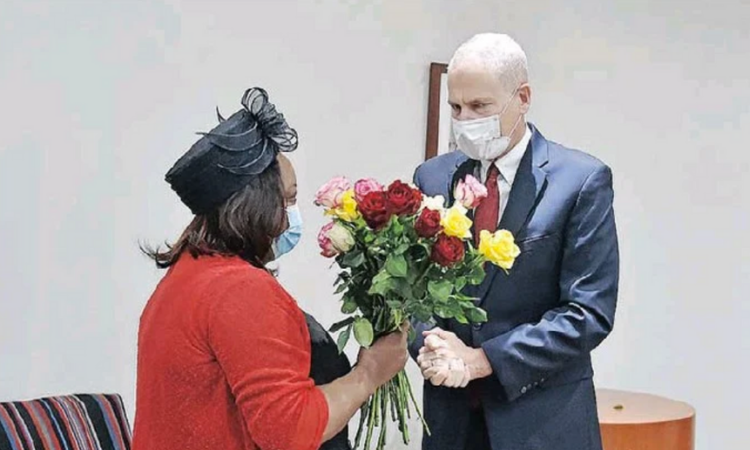 DR Lebo Matlebyane receive roses from the Chargé d’affaires at the US Embassy in Pretoria, Todd Haskell, in remembrance of her husband, Martin Matlebyane. The late Matlebyane was the longest-serving staff member at the US Embassy. l THOBILE MATHONSI/AFRICAN News Agency (ANA)

TO HONOUR and celebrate its late and longest-serving employee Martin Matlebyane, the US Embassy in Pretoria has renamed its Maker Space at the Es’kia Mphahlele Library after him.

His commemorative plaque and photo were unveiled at the library this week.

Matlebyane worked at the embassy for more than 33 years.

He died from Covid-19 in July last year, after which the embassy proposed and gained concurrence from the City of Tshwane and his family to rename the Maker Space in his honour.

Chargé d’affaires from the US Embassy Todd Haskell said Matlebyane was committed to lifelong learning and engaged in American Spaces during the apartheid era as a staff member for the US Information Service.

He was a frequent partner with the Public Affairs Section in engaging young people at the mission’s American Spaces throughout his career.”

Haskell added that Matlebyane joined their team at the age of 19, working in the American Reading Room in Soweto.

The facility still exists today and is known as the Rosa Parks Library. At the time, Matlebyane enjoyed reading and sharing his knowledge and expertise with other people.

He influenced generations of young people to focus on their studies to change their lives and communities for the better.

“The US Embassy is honoured to dedicate the Maker Space here at American Corner Pretoria in Martin’s name so that he will continue to leave a mark on generations of South Africans to come,” Haskell said.

His eldest daughter Lehlogonolo said they were extremely honoured and grateful to the American Embassy for honouring her father.

The dedication of a room to her father in a national library said a lot about the person he was, she said.

“We are proud of my dad’s contribution not only to US and South African relations, but to the youth of South Africa.

“His sole mission in life was to empower young people through reading.”

Minister Counsellor for Public Affairs at the US Embassy, Frank Whitaker, said the plaque was a lifetime memory of a man who dedicated his life and worked tirelessly to provide substantive information to all types of people who frequented the library. 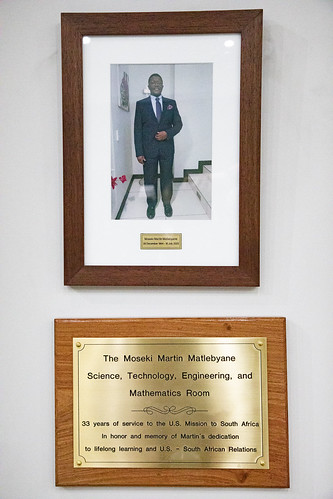