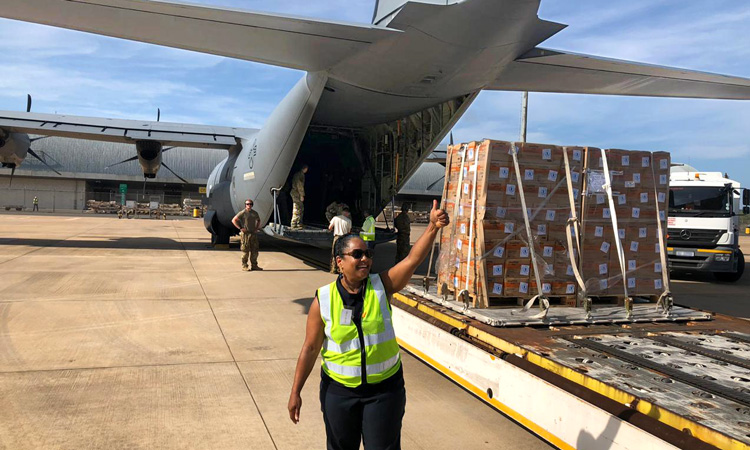 U.S. Consul General in Durban Sherry Zalika Sykes visited King Shaka International Airport yesterday to view a shipment of UN World Food Programme food and relief supplies to be transported from Durban to Mozambique by the U.S. Department of Defense.  We thank the South African Department of International Relations and Cooperation (DIRCO) and the South African National Defense Forces (SANDF) for expediting the necessary authorizations for these lifesaving airlifts.

The commodities that the U.S. Department of Defense is airlifting from Durban come from WFP’s internal stocks. Separately from these shipments, the United States has provided nearly $3.4 million in additional funding for the UN World Food Programme (WFP) to deliver approximately 2,500 metric tons of rice, peas, and vegetable oil to affected people in Sofala, Zambezia, and Manica provinces.  This lifesaving emergency food assistance will support approximately 160,000 people for one month.

To date, the U.S. government has provided nearly $7.3 million (R105 million) in humanitarian assistance to help people in Mozambique, Zimbabwe, and Malawi who have been affected by Cyclone Idai, as well as flooding that occurred earlier this month. This includes more than $6.5 million from USAID.

As flood waters begin to recede, the DART is continuing to identify additional humanitarian needs and working with our United Nations and NGO partners to rapidly scale up response efforts, prioritizing the provision of emergency shelter, food, water, improved sanitation, and hygiene supplies.

USAID’s Office of U.S. Foreign Disaster Assistance (USAID/OFDA) is the lead federal coordinator for international disaster response within the U.S. government. At the request of USAID/OFDA, the U.S. Department of Defense U.S. Africa Command is providing airlift and logistics support for the humanitarian response to Cyclone Idai. The U.S. military deployed two C -130 cargo planes to assist USAID in delivering critical relief supplies, like food, water treatment units, and heavy-duty plastic sheeting, to hard-to-reach areas. To date, the U.S. military has airlifted more than 50 metric tons of humanitarian supplies, with more flights happening daily. The DART is working closely with the local government, as well as with WFP, the International Organization for Migration, CARE, and World Vision, to ensure that these relief items are distributed to the affected communities.

In support of USAID, the U.S. Department of Defense also deployed the 435th Contingency Response Group, along with cargo handling equipment, to help expedite the flow of relief supplies. This technical team is working closely with USAID and the Government of Mozambique at the airports in Maputo and Chimoio to ensure that aid is delivered quickly to people in need. They are providing 24-hour support for receiving and packaging aid.

To help prevent the spread of waterborne diseases, like Cholera, USAID is working with partners to provide safe drinking water and hygiene supplies for more than 150,000 people, with more supplies on the way. In addition, USAID’s DART includes health and water, sanitation, and hygiene experts who are assessing needs and working with partners to respond as the situation changes on the ground.