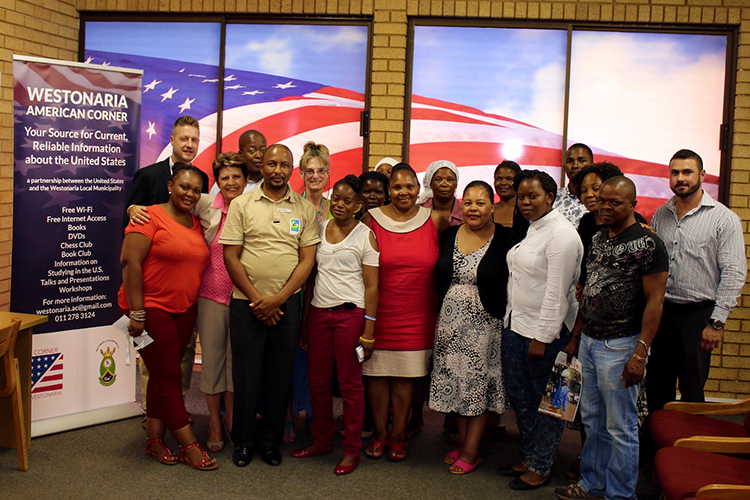 Some of the attendants with Craig Carty.

Gender-based violence is not just a problem in society today – it’s a stain that demeans women and girls often for the rest of their lives, and it disgraces us all. As we wind up 16 Days of Activism Against Gender-based Violence, the U.S. Consulate General in Johannesburg hosted an afternoon workshop at the Westonaria American Corner near Johannesburg with social activist and researcher Craig Carty. NGO officials, social workers, and members of the Westonaria community attended the workshop where Craig emphasized the importance of every member of the community playing their part in the fight against gender-based violence, highlighting South Africa’s 2015 16 Days of Activism theme, “Count me in: Together moving a non-violent South Africa forward.”

According to the UN, 35% of women and girls experience some form of physical and/or sexual violence in their lifetime, with some places reporting up to 70%. In the light of these statistics, Craig Carty highlighted some ways individuals can contribute to the alleviation of women and child abuse, including encouragement to female victims not to remain silent, to talk about abuse and ensure they get help. He also emphasized the importance of reporting child abuse to the police, as children often have no voice of their own. Carty also noted the need to engage with men and boys to talk about abuse and empower them to actively discourage abusive behavior. He concluded by challenging everyone to understand how our own attitudes and actions might perpetuate sexism and violence.

Members of the Westonaria community made use of the opportunity to get advice on running school and community programs, collaborating with established organizations and starting NGOs that will provide help to survivors of abuse.