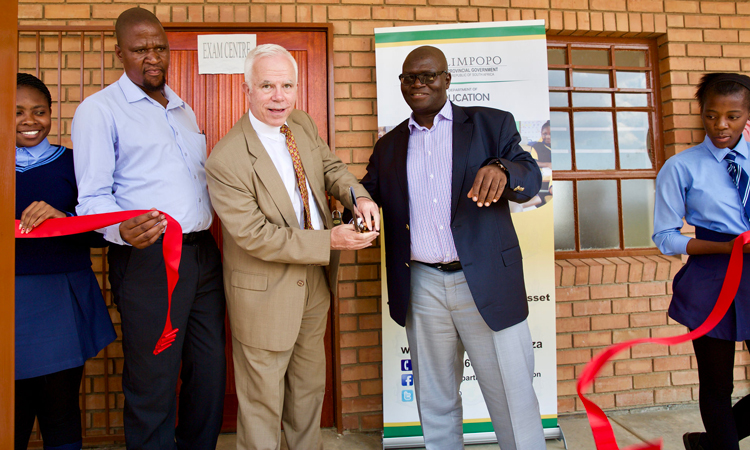 U.S. Consul General in Johannesburg, Christopher Rowan, delivered remarks on November 29, 2016 at the Mapeloana Secondary School in Limpopo during a ribbon cutting ceremony marking the completion of the school’s renovation. Funding for the renovations was provided by the United States’ Office of Defense Cooperation (ODC) at the U.S. Embassy in Pretoria.

In 2013, the Limpopo Department of Education approached ODC with a request for assistance in renovating Mapeloana Secondary School. The school was in a dilapidated state and classrooms were overcrowded with learners, which contributed to a poor learning environment. ODC, through a grant of R3 million ($194,805), constructed six new classroom blocks, one new toilet bloc, renovated existing toilets and classroom floors and replaced all broken windows. This refurbishment project has benefited the 550 learners in Grades 6 through 12 who are now using the improved facilities.

Consul General Rowan said that although it might come as a surprise to some that the U.S. military sponsored such a project, the U.S. military in fact “spends a lot of time and effort providing humanitarian support, like helping build and repair schools, health clinics, and more.”

The United States is proud to stand with the people of South Africa in promoting investments in education. Numerous U.S. Government agencies support the U.S. government’s efforts to promote education in South Africa.  ODC works with South African institutions to build schools throughout Limpopo and Mpumalanga.  Over the last four years, ODC has completed more than a dozen schools, constructed community centers, hospices, and sponsored learning materials for thousands of high school students towards promotion of Science, Technology, Engineering, and Mathematics (STEM) education.  The total value of these programs exceeds $4 million.

The United States Agency for International Development (USAID) portfolio in South Africa on education is worth more than $50 million, with activities focusing on improving primary grade reading results and on HIV/AIDS prevention. The United States also supports a range of educational and cultural exchange opportunities in South Africa including the Mandela Washington Fellowship, Fulbright, African Women Entrepreneurship Program, and the International Visitor Leadership Program.