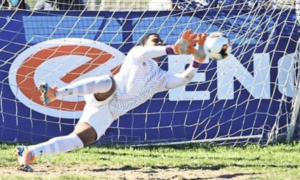 Cape Town – An aspiring soccer player from Mitchells Plain, Taariq Ganga, received an opportunity to travel to the US for a soccer scholarship that will allow him to shape his career and inspire others in his community.

Ganga received a full athletic soccer scholarship at Iowa Lakes Community College in the US after working with the Education USA team. He was initially selected by an American initiative known as Ubuntu Football when he was 12.

Ganga grew up in a home with financial difficulties that precluded him from pursuing his dreams.

“The scholarship would further develop my skills and being in a different environment among new people would allow me to showcase a different brand of goalkeeping which I’m really excited about. It’s basically a restart button and I’m super excited for this new season,” he said.

Ganga started playing at the age of 7 at Parkhurst Football Academy. Over time he transitioned into becoming a goalkeeper.

“The main thing is to be a sign of hope for my community. Many people do not realise that growing up on the Cape Flats is tough. It’s super hard for our youth to dream big and have big ambitions because of the temptations they face every day, resources that are lacking and role models that we are lacking. I just want to encourage the youth to explore new things and continue to find people that contribute to you being the best version of your last,” he said.

US Consulate in Cape Town Deputy Consul General Will Stevens said: “Taariq is one of the over 2 000 South African students currently studying in the US.

“We are so thrilled to see him achieve his academic goals in higher education on a full scholarship. The US Mission in South Africa is committed to helping prospective students receive the resources they need to successfully study in the US.”

Ubuntu Football Executive Director Casey Prince said: “I am so thankful for the support, relationship, and partnership of EducationUSA!

“Their support of our young men from Ubuntu Football Academy has been a game-changer in their journey to studying in the US.”

She said the scholarship would give him exposure to major universities where he can finish his degree. The EducationUSA Opportunity Funds programme assists qualified students who are likely to be awarded full financial aid from US colleges and universities who lack the financial resources.