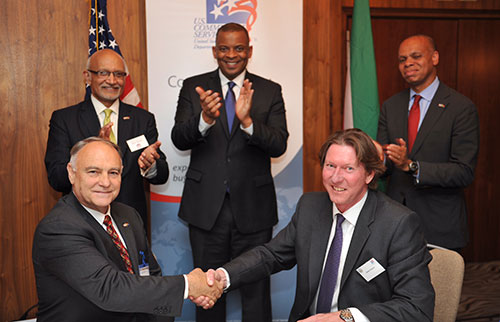 As part of this initiative, Teras Cargo Transport will be growing its fleet with additional U.S. Flagged multi-purpose geared ships and Grindrod will be providing stevedoring and terminal services along with agency services throughout Southern and East Africa.

The Companies are pleased that as a result of this cooperation, both organizations will assist in the growth of the oil and gas industry which will create new jobs and economic benefits in the United States, South Africa and other Southern African countries.

A formal recognition of this partnership was signed yesterday between Joe Sanders, CEO of Teras Cargo Transport and Walter Grindrod of Grindrod Limited in the presence of numerous dignitaries at a reception hosted by the U.S. Ambassador Patrick Gaspard in honor of a trade mission led by Anthony Foxx (U.S. Secretary of Transportation) and Arun Kumar (U.S. Assistant Secretary of Commerce).

This trade mission targeting South Africa, Mozambique and Kenya consists of fourteen U.S. companies and is aligned to U.S. President Barack Obama’s $7-billion ‘Doing Business in Africa’ campaign.  It represents the commitment of the United States of America to connect U.S. companies to opportunities on the African continent which will lead to business growth for both U.S. companies and their local African partners with overall sustained economic improvement.

For more information on Teras Cargo and Grindrod Limited visit their websites: