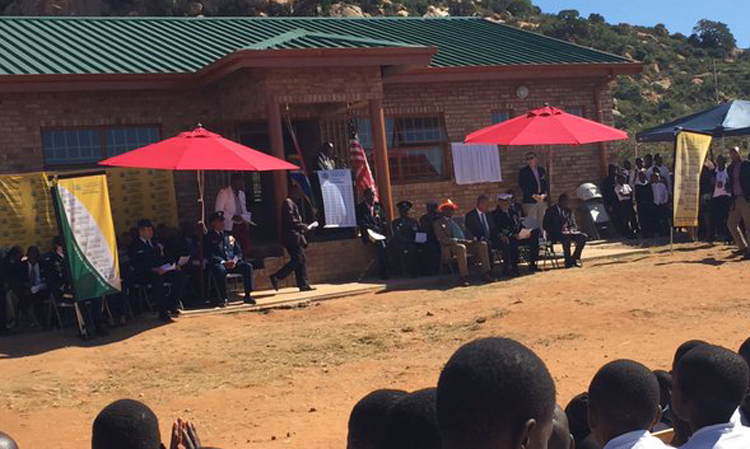 Ambassador Gaspard kicked off his visit on May 23 by attending a ribbon-cutting ceremony at the newly built Mamothalo Primary School.

Media Advisory
Embassy of the United States of America
May 24, 2016
FOR IMMEDIATE RELEASE
For more information: Cynthia Harvey at USEmbassySAPress@state.gov

U.S. Ambassador to South Africa Patrick Gaspard visited Limpopo May 23-24 to engage in a range of activities highlighting the growing ties between the people of Limpopo and the United States.  Hlayisani Nkwashu, an alumnus of the 2015 Mandela Washington Fellows (MWF) program, hosted the Ambassador in his hometown of Blinkwater and showcased his work as a champion of youth socioeconomic development projects that create employment opportunities for women in Limpopo.

Ambassador Gaspard kicked off his visit on May 23 by attending a ribbon-cutting ceremony at the newly built Mamothalo Primary School.  The school, built with funding provided by the U.S. Office of Defense Cooperation (ODC), in partnership with the Department of Education, Limpopo government and USAID, is one of several ODC Humanitarian and Civic Assistance (HCA) projects in South Africa that build educational facilities in disadvantaged areas.

Speaking at the ceremony, Ambassador Gaspard said, “This new school will serve 700 learners, as well as the administrative functions of the teachers in your community.  We all know that there is no one more important in a community than its teachers.  It has often been said that a teacher cannot measure the contribution they make in their lifetime.  Instead, their influence stretches into eternity.  As I look at these young learners, I know the skills they are acquiring today will stretch from generation to generation.  We are determined to move toward a partnership for prosperity that will move our relationship from strength to strength.  But we know at the backbone of that relationship are the young children in this community.  I am sure, once given the tools, they can out-perform and out-innovate any other young people in the world.”

On May 24, Ambassador Gaspard visited one of the 43 schools in Limpopo where American Peace Corps Volunteers are currently teaching.  Finally, he met with Limpopo Premier Stanley Mathabatha in Polokwane, where they discussed issues of mutual interest between the United States and South Africa.