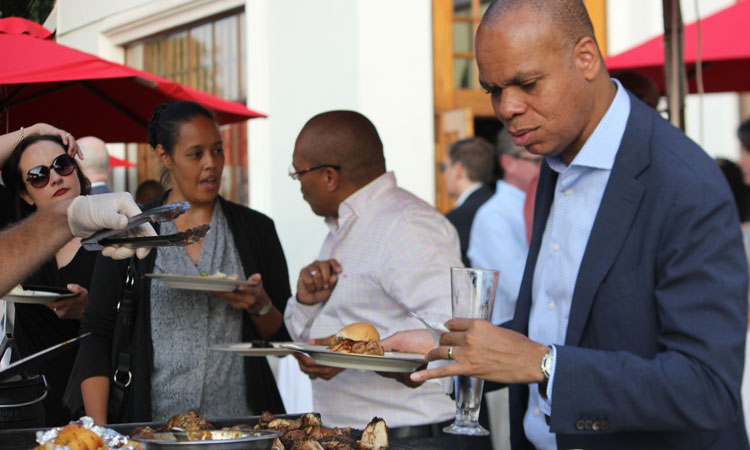 Ambassador Gaspard celebrated the growing trade relationship between South Africa and the United States and the successful renewal of the African Growth and Opportunity Act (AGOA) at a braai at his residence on April 25.

As U.S. poultry, beef, and pork make their way to South African retailers’ shelves, the longstanding trade dispute has ended and new avenues for trade and partnership between the U.S. and South Africa are opening.  Ambassador Gaspard acknowledged this milestone at “The Mother of All Braais,” where grilled chicken, beef, and pork were served to more than 100 invited guests, including officials from the Department of Trade and Industry, led by Ambassador Faizel Ismail, the United States of America Egg and Export Council (USAPEEC), led by President Jim Sumner, representatives from the Department of Agriculture, Forestry and Fisheries, as well as media, importers, restauranteurs, and others who simply enjoy a good braai.

Ambassador Gaspard said, “It is an honor to welcome so many South African friends to my home today.  With the AGOA trade talks concluded, we can now redouble our efforts toward a partnership for prosperity that creates jobs and supports South Africa’s economic growth.  We’re already working on strengthening the domestic information economy, including ICT and pharmaceuticals, addressing structural challenges in order to improve port efficiencies, and expanding private sector power generation, including rooftop solar revolution.  And this is just the beginning.  I am certain, working together, our governments can achieve great things.”

Jim Sumner added, “We are thrilled to be back in the South African market.  This will help South African consumers who are facing drought and increasing food prices.  U.S chicken is among the most safe and wholesome in the world.  I know in the future we can all work together effectively and cooperatively to the benefit of Americans and South Africans.”

On March 14, 2016, President Obama issued a proclamation confirming South Africa’s eligibility to continue to participate in AGOA.  The entry of U.S poultry into South Africa was required as a condition for avoiding South Africa’s suspensions under AGOA.  With all issues involving AGOA resolved, Ambassador Gaspard has conveyed his commitment to developing a broader, stronger economic partnership with South Africa. As a part of the AGOA agreement, fifty percent of the 65,000 ton quota is being set aside for historically disadvantaged individual (HDI) importers.  Through programs such as this, the U.S. government is ensuring the benefits of AGOA are broad and inclusive.