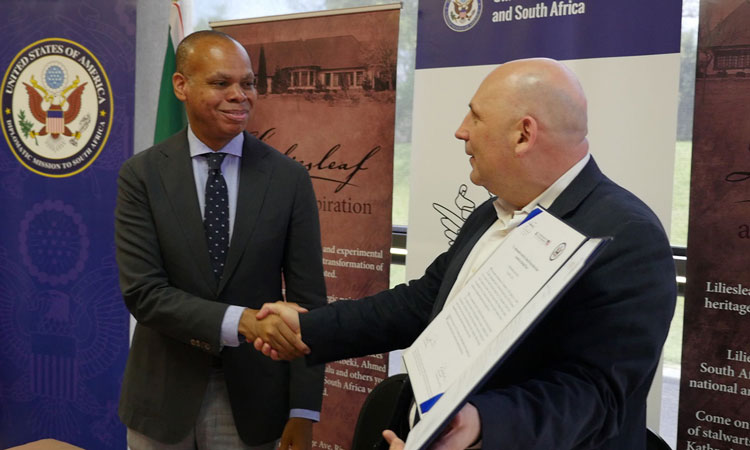 Ambassador Gaspard presented Liliesleaf Farm CEO Nicholas Wolpe with a U.S. Ambassadors Fund for Cultural Preservation (AFCP) grant totaling $103,329 at a signing ceremony in Rivonia on October 12.  Liliesleaf Farm was selected to receive the grant following a worldwide competition for funds dedicated by the U.S. government to the preservation of cultural sites, cultural objects, and forms of traditional cultural expression in more than 100 countries.

Liliesleaf Farm will utilize the grant to conserve rare items of significant value and relevance to the history of South Africa’s liberation movement, including oral histories, rare books, letters from prison, scrapbooks, strategic organizational documents, and works produced in exile.  The project aims to increase sustainability, accessibility, and awareness of the items through digitization for future scholars.

Speaking at the signing ceremony, where he presented several historical documents for public display the first time ever, Nicholas Wolpe said, “this AFCP grant will enable the Liliesleaf Trust to commence with the conservation and preservation of invaluable historical material.  Liliesleaf is committed to ensuring that our past is not only conserved and preserved but is also accessible and available through the digitation of all material in the archive.  We appreciate this AFCP grant, which will go a long way to enabling Liliesleaf to fulfill this critical mission task and objectives.”

Ambassador Gaspard said, “I find it especially poignant that we are able to support the Lilliesleaf project in a year when South Africa is marking a series of important anti-Apartheid milestones, including the 40th anniversary of the Soweto uprising and the 60th anniversary of the Women’s March.  The preservation of the rare materials and documents of the courageous men and women who fought against Apartheid ensures that future generations will continue to learn from the lessons they taught us.”

Since the AFCP’s inception in South Africa in 2003, the U.S. government has provided more than $1 million for 13 projects that recognize the country’s remarkable cultural heritage.  The first AFCP project involved archaeological objects and site preservation at the Cradle of Humankind UNESCO World Heritage site.  The second AFCP project, in 2004, involved the collection of oral histories of former residents of District Six in Cape Town, who were forcibly removed from their homes by the Apartheid government and separated from their neighbors beginning in the mid-1960s.  AFCP funds have continued to be provided to deserving organizations;  just yesterday Ambassador Gaspard presented a $500,000 grant to Iziko Museums for the conservation of objects recovered from the 18th Century São José Slave Shipwreck in Cape Town  The AFCP grant to conserve of the 20th-century Lilliesleaf Archive Collection continues this tradition, supporting the work of an esteemed South African institution to fill historiographical gaps of the anti-Apartheid struggle and other defining events in modern South African history.

More information about the AFCP may be found at https://eca.state.gov/cultural-heritage-center/ambassadors-fund-cultural-preservation and https://www.youtube.com/watch?v=38t07OfESug.

The project seeks to conserve rare items of significant value and relevance to the history of South Africa’s liberation movement, including oral histories, rare books, letters from prison, scrapbooks, strategic organizational documents, and works produced in exile.  The project aims to increase sustainability, accessibility, and awareness of the items through digitization for future scholars.

2016 Conservation of Objects Recovered from the 18th-Century São José Slave Shipwreck in Cape Town ($500,000 – this represents $230,000 from Ambassadors Fund for Cultural Preservation and $270,000 from the Bureau of African Affairs at the Department of State.)

This 18th century slave ship wreck is the first to be identified that sank while actually carrying a cargo of slaves, representing the lives lost and disrupted during the global slave trade.  The project preserves and displays objects from the ship wreck and builds institutional capacity through training, education, and cultivation of economic empowerment through cultural preservation.

2014 Conservation of Traditional Musical Instruments in the Collection of the International Library of African Music ($58,847)

The largest of its kind in Sub‐Saharan Africa, this collection of traditional musical instruments requires urgent attention to offset damage and decay from environmental hazards. This project includes much needed improvements to the collection storage environment.

2013 Conservation of the Historical Collections of the Nelson Mandela Centre of Memory in Johannesburg ($103,163)

The center’s collection consists of historic posters, photographs, manuscripts, and other materials documenting the struggle to end apartheid. Much of this archive is acidified paper and highly susceptible to degradation. The project involves systematic de‐acidification of the collection in preparation for its transfer to refurbished collections storage space.

2013 Conservation of the Late Iron Age Ivory and Bone Tool Collections at the University of Pretoria and Mapungubwe Museums ($26,300)

A World Heritage site, Mapungubwe was the center of an extensive Iron Age trade network, and excavations since the 1930s have yielded important collections of bone and ivory artifacts. This project involves a conservation needs assessment and the design and installation of a suitable storage environment for the objects.

To support the preservation of the 19th‐ and early 20th‐century archives of Inanda Seminary, the first boarding high school for black girls in southern Africa. Established in 1869, Inanda was the only school for black students not forced to adopt South Africa’s restrictive Apartheid‐era Bantu education policy. The school’s alumni include distinguished women in southern African politics, medicine, business, and other sectors. This project focuses on the preventive conservation and display of the historical documents and complements efforts underway to restore the historic seminary buildings.

To support the preservation of rock art sites at uKhahlamba‐Drakensberg World Heritage Site and other locations in South Africa. The historic rock art sites are threatened by human and wildlife encroachment and exposure to the elements. The project involves the cleaning of the stone surfaces and the removal of graffiti and salt deposits.

To support the restoration of the mid‐20th‐century Hostel No. 33, the last remaining hostel in the Apartheid‐era migrant labor camp in Lwandle. One of more than 30 hostels built in Lwandle in the late 1950s to house black men, Hostel No. 33 is a sobering reminder of the alienating and exploitative migrant labor system in force for nearly 50 years. The project involves critical structural repairs and the restoration of the building for use as an architectural exhibit.

To support the restoration of the thatched roof, windows, and interior of the former church at

Botshabelo, a mission station established by the Berlin Missionary Society in 1868 as a safe haven from conflicts among warring groups. The brick church is a centerpiece of an historic property known for its ethnic diversity and agricultural innovation, and its restoration is vital to the preservation and sustainable development of the site.

2006 Preservation of the Collections of the Local History Museum in Durban ($20,000)

To provide equipment to digitize 40,000 items in the seven satellite museums of the Local History Museum of Durban. The museum’s collections include slides, photos and negatives that recorded the social, political and cultural history of KwaZulu‐Natal province since the early 19th century. The project will preserve the collections from deterioration and provide access to researchers and the public.

To enable the research and revival of the making of traditional African instruments with the elders who currently make and play them. South African youth are growing up without the knowledge of indigenous African instruments and music, while the society is rapidly losing the elders who retain the knowledge. It is urgent to preserve indigenous music through music education.

To enable the documentation of the oral history of District Six in Cape Town. District Six was declared a “White Group” area in 1966 and remained vacant for almost 30 years. Twenty‐four families have returned to the district and the Museum will record their living memories as well as those of other former residents, many well over the age of 70.

2003 Preservation of Archaeological Sites Within the Cradle of Humankind World

To support heritage development at the Cradle of Humankind World Heritage site. The investigation of three archaeological sites will produce important archaeological and human fossil remains. Their development is critical to the overall scientific study of the area. Requested funds will also help upgrade existing research facilities at the sites and add a number of small but vital infrastructure improvements to help protect the sites from the effects of increased tourism.