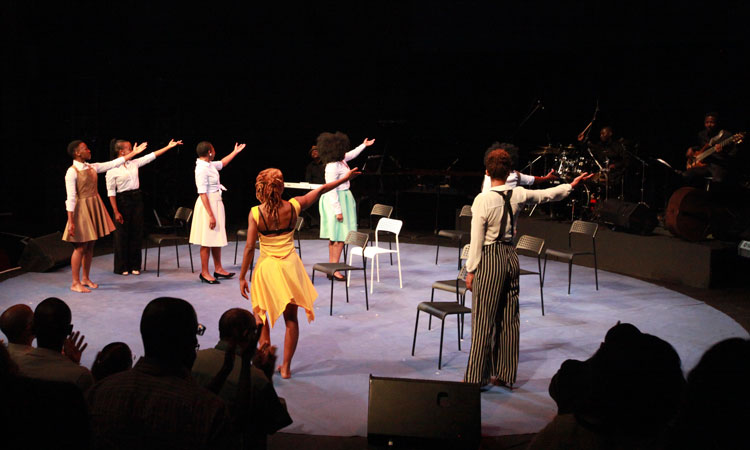 The production brought together a cast of South African actors who portrayed Maya Angelou’s struggle, liberation, and life in vivid spoken word, song and dance.

U.S. Ambassador Patrick Gaspard said, “Maya Angelou was part of a vibrant cohort of African American activists – Malcom X,  W.E.B. Du Bois, Stokely Carmichael, and Dr. Martin Luther King Jr. – who extended their political citizenship to Africa.  They drew support and inspiration from struggles in Sub Saharan Africa and then ultimately returned that support during the campaign against apartheid.  That is why she matters here and why so many Africans marked her passing.  She and these leaders connected the United States and South Africa in remarkable ways.  We reflect on this rich history of connectivity between our countries and draw upon the strength of our relationship as we move forward.”

Director James Ngcobo added, “we had an amazing audience last night who came to witness a warm, respectful piece we put together with a lot of humility to honor the great lady of verse.  Maya Angelou wrote a huge body of work and we delighted in finding ways to weave a story that would take our audience to some of the stations of a life lived by one of the greatest wordsmiths that we have ever known.”

Funding for this project is a part of U.S. Embassy Pretoria’s ongoing support for educational and cultural exchange programs in South Africa.  These programs, sponsored by the U.S. Department of State, promote dialogue and encourage mutual understanding between Americans and South Africans.

More on this Event