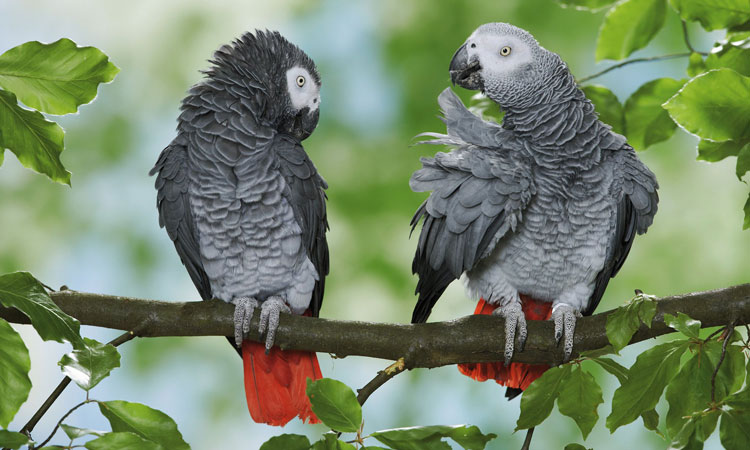 (Johannesburg, South Africa) – African grey parrots are being loved to death. Their intelligence and longevity make them popular as pets, and overharvest for the pet trade is devastating populations in the wild. Fortunately, nations gathered at the world’s largest and most important wildlife trade conference today handed these birds a lifeline by granting them increased protections under a global treaty called the Convention on International Trade in Endangered Species of Wild Fauna and Flora (CITES). CITES member nations, referred to as “Parties,” voted to increase protections for grey parrots in a proposal co-sponsored by the United States.

“Increased CITES protections come not a minute too soon for African grey parrots,” said U.S. Fish and Wildlife Service Director Dan Ashe, head of the U.S. delegation to the treaty’s 17th Conference of the Parties (CoP17) in Johannesburg, South Africa. “During the past 25 years, more than 1.5 million wild African greys have been taken from their native habitats, making them one of the most traded of all CITES-listed parrots.”

The Johannesburg vote moves the parrots from Appendix II of the convention to Appendix I, the most restrictive of the CITES designations, which prohibits international commercial trade.  Leading up to and during this meeting, the United States worked closely with a coalition of countries committed to gaining support for the Appendix I-listing proposal. The proposal, submitted by Angola, Chad, the European Union, Gabon, Guinea, Nigeria, Senegal, Togo and the United States, was adopted in a vote with 95 countries in support, 35 opposed, and five abstentions.

Thriving wild populations of the African grey parrot were once widespread throughout west and central Africa. However, CITES Appendix II protections were insufficient to control the pet trade demand, which, combined with deforestation for timber, fuelwood and agricultural expansion, has caused the species to be eliminated from much of its west African range. Today, the largest populations are now found only in central Africa.

Today’s vote still needs to be finalized at a session later in the week, but Ashe is confident the strength of the science supporting the Appendix I listing will ensure the protections will be upheld.

CoP17 is taking place Sept. 24 through Oct. 5, 2016. CITES is an international agreement initiated in 1973 and since agreed to by 182 countries and the European Union to protect certain wild animals and plants against over-exploitation as a result of international trade. More than 35,000 species of animals and plants benefit from CITES protection. Every two to three years, a session of the CoP is held to review, discuss and decide on changes in the implementation of CITES, including changes in protections for certain species.

Species protected by CITES fall under one of three appendices. Appendix I includes species threatened with extinction and provides the greatest level of protection, including restrictions on commercial trade. Appendix II includes species that, although currently not threatened with extinction, may become so without trade controls. Changes to Appendices I and II must be proposed at a CoP and agreed to by a two-thirds majority of the parties present and voting. In contrast, listings to Appendix III can be requested by individual parties at any time. Appendix III includes species protected by at least one country that needs assistance from other parties to control trade.

VIDEO: Produced by Cornell Lab of Ornithology available at https://www.youtube.com/watch?v=RfXxh0Eff_w

To learn more about the Service’s involvement in CITES CoP17, visit: https://www.fws.gov/international/cites/cop17/index.html

he mission of the U.S. Fish and Wildlife Service is working with others to conserve, protect, and enhance fish, wildlife, plants, and their habitats for the continuing benefit of the American people. We are both a leader and trusted partner in fish and wildlife conservation, known for our scientific excellence, stewardship of lands and natural resources, dedicated professionals, and commitment to public service. For more information on our work and the people who make it happen, visit www.fws.gov.