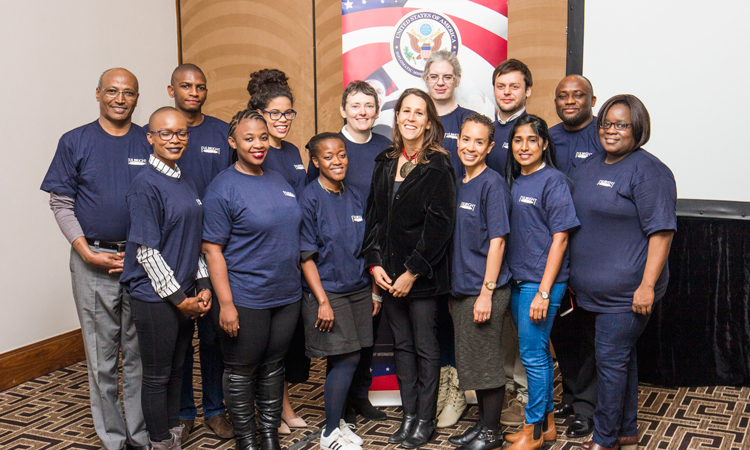 Microbiology, mathematics, biochemistry, international affairs, astronomy, ethnomusicology….  These are just some of the many disciplines pursued by South Africans in the 2017 Fulbright Students and Scholars cohort.  The U.S. Embassy’s Fulbright office hosted the 2017 class of students and scholars for a pre-departure orientation on June 23 in Sandton, as they prepare for the next step in their academic careers following a highly competitive selection process.

The world-renowned Fulbright Program provides scholarships to university graduates seeking a Master’s or Doctoral degree in nearly any field of study at a university in the United States.  The National Research Foundation (NRF) is partnering with the U.S. Embassy to expand the number of participants in this year’s cohort by sponsoring graduates pursuing Doctoral degrees.  Nine South Africans will pursue high-level degrees at universities throughout the U.S., including Georgetown University and the University of Pennsylvania.  In addition, throughout the next three months, six scholars will travel to the U.S. to conduct research in fields ranging from social studies to biology.  Two additional South Africans will travel in the coming weeks as a Hubert H. Humphrey Fellow (to pursue non-degree academic study) and a Fulbright Foreign Language Teaching Assistant, who will teach Zulu in the U.S.

Speaking at the pre-departure orientation, Chargé d’Affaires Jessica Lapenn said, “When he founded the program, Senator Fulbright intended, ‘to bring a little more knowledge, a little more reason, and a little more compassion into world affairs and thereby to increase the chance that nations will learn at last to live in peace and friendship.’  For the South Africa class of 2017, I hope it is in fact a lot more!  And that your Fulbright experiences reflect and contribute to the rich and productive relationship that is enjoyed between Americans and South Africans.”

South Africans interested in applying for the Fulbright program may find more information and by following the U.S. Embassy on Facebook and Twitter at USEmbassySA, or visiting the U.S. Embassy website page at https://za.usembassy.gov/education-culture/educational-exchanges/fulbright-flagship-programs/