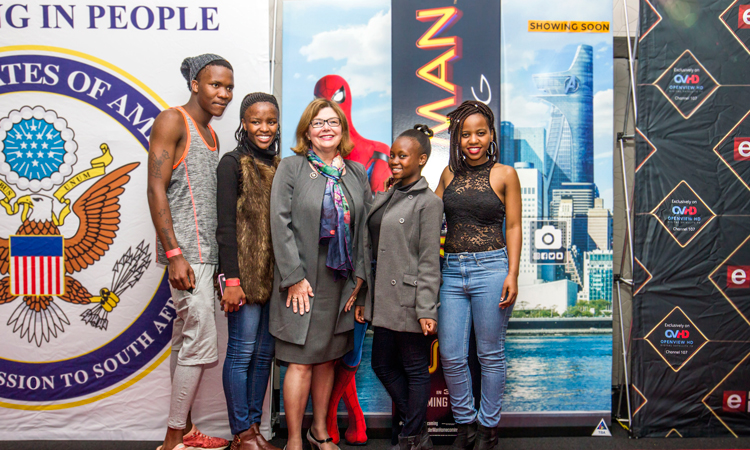 Five finalists of the “Hometown Heroes” competition on stage with Acting Deputy Chief of Mission Elizabeth McKay, where they received recognition for their community development initiatives and small cash prizes toward the continuation of their work to build their communities.

In partnership with SONY Pictures South Africa and e.tv, the U.S. Mission in South Africa recognized young South Africans making a difference in their communities on July 3 with an exclusive premier of the movie Spider-Man: Homecoming.

Through a campaign on e.tv, Sony Pictures asked young South Africans making a difference in their communities to enter a competition or to nominate one of their peers.  The “Hometown Heroes” competition received entries from young leaders doing amazing work throughout South Africa such as keeping students in school, providing clothing to those in need, and organizing after-school activities and mentors.  The vast number of entries demonstrated the broad potential and Ubuntu spirit of South Africa’s youth.

Prior to the exclusive pre-screening of SpiderMan: Homecoming, the five finalists received on-stage recognition and a small cash prize toward the continuation of their work to build their communities.  The finalists, selected from across South Africa, were: Francinah Kgwete (from Polokwane), Kedibone Ndweni (from Bloemfontein), Masego Mosala (from Kimberley), Sinethemba Ngxaliwe (from Soweto), and Tiana Jensen (from Cape Town).

Speaking at the pre-screening in Hyde Park, Acting Deputy Chief of Mission Elizabeth McKay said: “You are all heroes who have exemplified great courage and leadership in creating projects that serve and help our communities. The U.S. Embassy recognizes you today; we acknowledge you, and we thank you for your commitment. I encourage you to keep taking steps and contributing positively to your community, nation, and ultimately our world – just like the Marvel Hero, Spider-Man.”