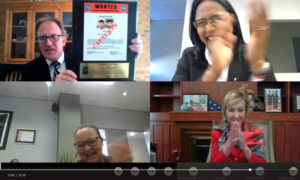 On July 16 the United States Fish and Wildlife Service (USFWS) recognized South African Advocate Anne Heeramun for her efforts in the prosecution and planned extradition of Byungsu Kim, a South Korean national wanted in the United States for international plant trafficking from protected areas.

The successful collaboration between the United States and South African officials, including the Endangered Species Unit led to the arrest of the transnational fugitive in Cape Town in October 2019 based on illegal possession of protected succulent plants valued at more than one million U.S. dollars. In July 2020, together with the USFWS, Advocate Heeramun secured the pending extradition of Byungsu Kim to the United States.

Advocate Heeramun prosecuted Kim and a co-conspirator for violating South Africa’s environmental laws. She obtained convictions against both subjects and secured suspended jail sentences of six years for each subject. She also secured fines for both defendants in the amount of R5,000,000 (Approximately $300,000 USD).  A significant portion of those fines will be used for environmental conservation in South Africa. Following those successful cases in South Africa, Heeramun volunteered to continue working on the case and helped the USFWS secure Kim’s extradition to the United States.

“Advocate Heeramun embraced a cooperative working relationship with her colleagues in the United States and this led to justice truly being served. Most importantly, it sends a very strong message to all transnational criminals that the United States and South Africa are allies in the fight against crime and that together we make a united and formidable adversary for those who would destroy our environment for profit or otherwise disobey the rule of law,” said U.S. Ambassador Lana Marks.

Thousands of plants and wildlife species are threatened by illegal and unsustainable trade, ultimately harming wild populations and pushing endangered species toward extinction. Through the USFWS, the United States works closely with partners in South Africa and around the world to prevent illegal trade from negatively impacting a country’s natural resources and local communities.

In addition to Advocate Heeramun’s award, USFWS Attache Ed Newcomer, will present a second award to SAPS Lt. Colonel Johan Smit of the Stock Theft and Endangered Species Unit at a future date.