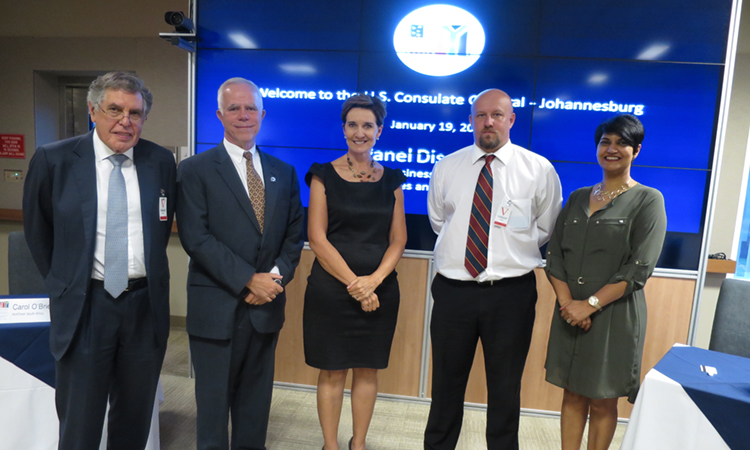 Consul General Christopher Rowan hosted a group of Georgia State University executive MBA students Tuesday at the U.S. Consulate General in Johannesburg for an insightful evening of discussion and networking. Also present were distinguished guests from the South African business sector, economists, academics, lawmakers, and members of the media. The panel discussion, themed: “Doing Business in South Africa: Challenges and Opportunities,” was facilitated by Shireen Chengadu, Executive Director of the Centre for Leadership and Dialogue at the Gordon Institute of Business Science. Panelists included Carol O’Brien, Executive Director of the American Chamber of Commerce, Michael Katz, CEO of ESNafrica, and Frans Cronje, CEO of the South African Institute of Race Relations. The students and other guests had an opportunity to engage with experts who shared insights on what makes doing business in South Africa attractive, and what could be improved.

AmCham Executive Director Carol O’Brien gave a very useful overview of some of the challenges U.S. companies face when doing business in South Africa. ENSAfrica CEO Michael Katz offered extremely helpful context to some of the legislation affecting foreign businesses, and he highlighted the country’s economic achievements since 1994. IRR CEO Frans Cronje rounded up the discussion by painting a vivid statistical picture of the historical, current, and predicted economic outlook of South Africa. Guests had the opportunity to engage the panelists and network at a reception after the formal discussion.