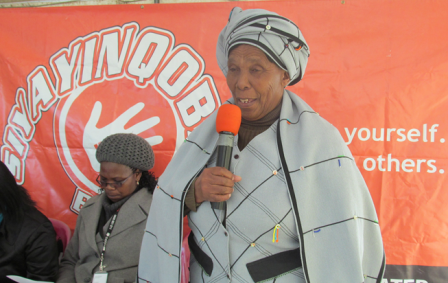 A traditional leader encourages people to step forward and test for HIV.

Not content with using a mass media to reach out on a national level, CMT goes one step further: with funding from PEPFAR through the Centers for Disease Control and Prevention the team has rolled out a comprehensive social mobilization campaign using the catchy Siyayinqoba brand at all levels of media, starting at national and reaching out to local communities through thought-provoking radio talk shows, news articles and even taxis branded with HIV prevention messaging.

CMT’s new project team, based in rural Mthatha in the Eastern Cape, works with local NGOs and community platforms to create a communication cascade that ensures the flow of HIV prevention and health information to all corners of the communities in the predominantly isiXhosa province.

On the ground, CMT holds regular door-to-door campaigns followed by “open days” especially in the two districts with high HIV prevalence — the OR Tambo and Alfred Nzo health districts.

Traditional chiefs and healers, and ward councilors lead discussions about HIV and health issues that are central to the lives of these communities, while guest speakers provide expert knowledge on treatment and prevention.

These open day and door-to-door drives aim to dispel this fear.

Nothobile Pasekile Mbele is a 49-year-old woman who took the step.  When CMT and TB/HIV Care Association arrived in her home town of Maluti, she plucked up all her courage to be tested.

“I am not afraid of the results as I’d rather know in time so that I can get the necessary treatment should the need arise,” she said before testing.

People like Nothobile are the champions who drive the success of these campaigns. Since the start of this project in March 2012, CMT has participated in a record 12 open days, reaching nearly 7,000 people.

More than 620 people have bravely stepped forward to undergo HIV counseling and testing, and more than 200 have been screened for TB.

The eight door-to-door campaigners have managed to visit more than 1,000 households in these hard-to-reach rural villages, and in total 5,435 people have been visited. Of those, a fifth were referred to local clinics for a range of preventative health services.

Mass media communication does reach people, and cascading HIV and TB messages through various levels from national to the face-to-face and on-the-ground awareness and education.

With this waterfall of messaging and services, CMT will empower communities and conquer the fear of HIV counseling and testing reaching out to all levels of society.

As one Mthatha resident when visited by a door-to-door educator declared: “I’ve seen Siyayinqoba on the TV, I heard Siyayinqobaon the radio talking about HIV and now you’re here at my house!”