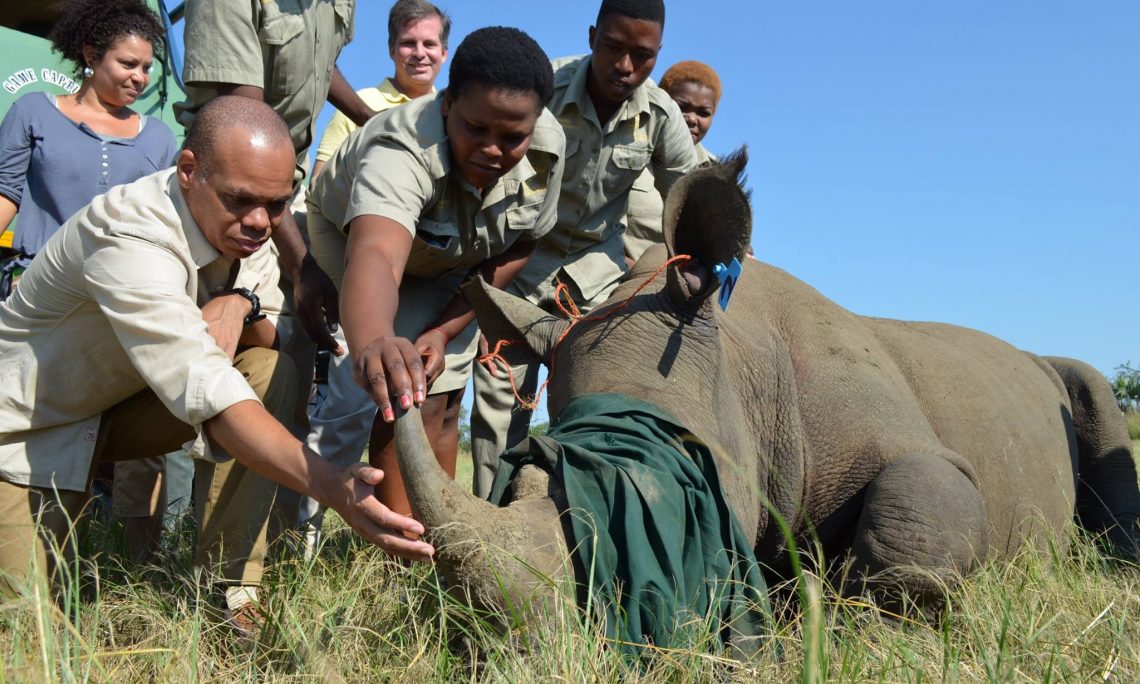 U.S. Ambassador to South Africa, Patrick Gaspard, his wife Ms. Raina Washington, and the U.S. Consul General to KwaZulu-Natal Taylor Ruggles were invited to Hluhluwe-iMfolozi Reserve by Dr. Bandile Mkhize, the CEO  of  Ezemvelo Wildlife in Kwa-Zulu Natal to participate in a rhino conservation airlift operation the week. South Africa has been at the fore front of rhino conservation in Africa and the Ezemvelo team demonstrated how science and technology is used to help keep wildlife safe from poachers.  The Ambassador echoed President Obama’s National Strategy for Combating Wildlife Trafficking and reassured our partners of America’s support for this most important work.

The Uthungulu Municipality also hosted the Ambassador where he met with a dynamic Peace Corp volunteer and the wider community team to talk about their work with young men and women on the importance of taking responsibility for their health and their futures.  He also met with the Isibindi U.S. PEPFAR funded child and family focused play group where he discussed the work of the professional child care workers and their guardians, and played a game of soccer with the talented young athletes!

This memorable trip to Kwa-Zulu Natal concluded with a visit to the Luthuli Museum in Groutville. Here the Ambassador met with one of Chief Luthuli’s daughters, Dr. Albertina Luthuli and museum staff. Dr. Luthuli recounted the historic moment in June 1966 when U.S. Senator Robert F. Kennedy, traveled to Durban, and defying apartheid authorities, met with Chief Luthuli in Groutville. She recalled her excitement as a young child seeing the helicopter land, and of how these two influential men sat talking on a bench, under a tree in the Luthuli garden. Chief Luthuli’s life, work, and philosophy remain an enduring legacy to South Africa, the United States, and the world and this visit provided an opportunity to highlight the collaborative efforts of the Luthuli Museum and the U.S. Diplomatic Mission to South Africa.