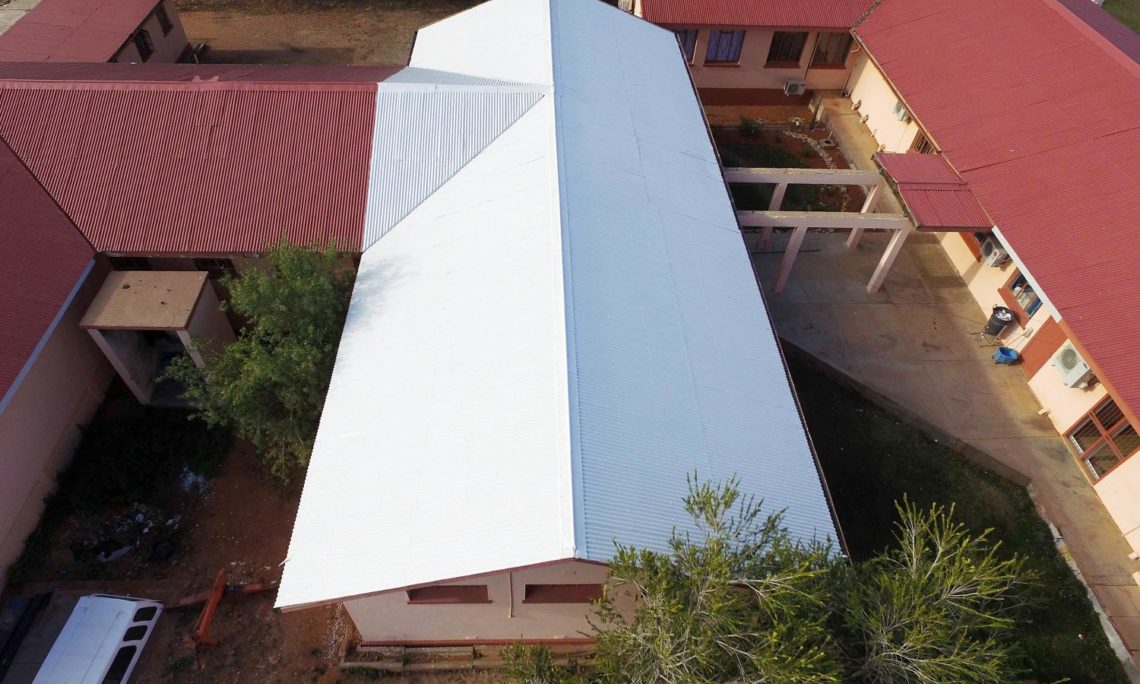 This public building in !Kheis is much cooler inside with reflective paint on the roof. (PEER Africa)

This public building in !Kheis is much cooler inside with reflective paint on the roof. (PEER Africa)

!Kheis — which means “a place to live” in the Khoi language — is a much better place to live today, thanks to renewable energy and innovative technologies.

A combination of government, nongovernment and business efforts are helping these things materialize in in !Kheis. And !Kheis is showing how new technologies such as “cool” paint can change lives.

!Kheis is hot. Temperatures often top 40 degrees C. The corrugated metal homes in low-income neighborhoods were just the places to test a new “cool coatings” technology. It’s a simple process: Roofs and other exterior surfaces are painted with coatings that reflect the heat of the sun.

The cool coatings project was led by a team from the Global Cool Cities Alliance, which brought U.S. companies and universities together with counterpart organizations in South Africa. One of these is the South African National Energy Development Institute (SANEDI), a government entity that tests, deploys and promotes green energy and energy efficiency.

The U.S. Department of Energy funded the venture through its Energy Efficiency and Renewable Energy International Team, which supports deployment of U.S. clean energy technologies and the growth of a strong market in South Africa. Dow Chemical also kicked in funding. Currently, 22 U.S. companies are participating in the project.

Bipin Shah, president of WinBuild Inc., a company that tests glazing systems, says the coatings can deflect 80 to 90 percent of the sun’s heating rays, creating a comfortable temperature inside the structure.

“The inside of the house is much cooler, even though there is much heat on the outside,” he said. There are other kinds of cool surfaces, such as tiles, but paint is cheapest — affordable in low-income communities.

“The idea is to make [buildings] as unpolluting and energy-efficient as possible,” said SANEDI’s Denise Lundall.

Before the buildings were painted with cool coatings, it was impossible to stay inside them on a hot day, according to resident Oom Isaac. Now homes are more comfortable in hot or cold weather. Other !Kheis residents describe their experiences in this video about the project.

“I am enormously impressed with the performance,” Lundall said. “The thermal comfort is fantastic.”

More jobs are cool, too

That’s not all. Jobs were created. Several local businesses were started by PEER Africa — another project partner — to apply the coatings.

An industry-recognized and nationally certified workforce-training program was developed, including courses that received certification from the South African Qualification and Certification Committee. After five days of intense training on prepping surfaces and applying cool coatings, graduates receive a nationally recognized certification good for five years.

Also being tested in !Kheis are intelligent transformers that measure the energy saved by the cool coatings technology, in collaboration with Empores, a U.S. energy technology company, and South Africa’s Specialized Solar Systems, which has built a microgrid in !Kheis. Locals have been trained to do energy audits and to install the units. Initial results show energy savings of 20 to 25 percent.

A website, the South Africa Energy Efficiency and Renewable Energy Exchange, was created for sharing project findings and other resources to benefit more communities.