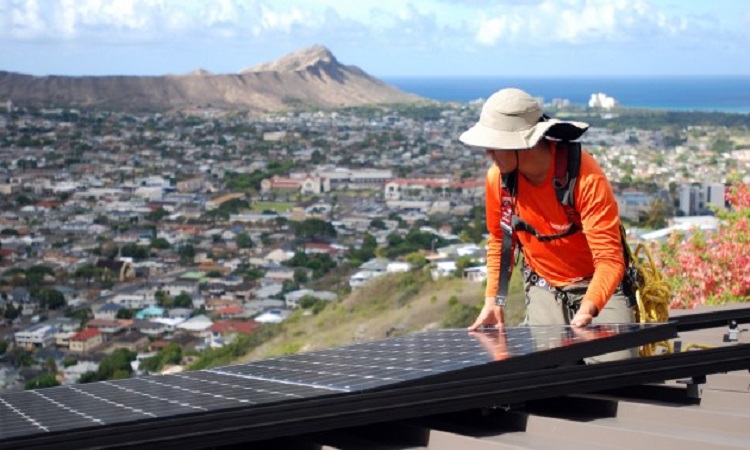 A man installs solar panels on a Honolulu rooftop. Hawaii is a U.S. national leader in solar power. (© AP Images)

A man installs solar panels on a Honolulu rooftop. Hawaii is a U.S. national leader in solar power.
(© AP Images)

Rooftops, great for shelter, can now make the homeowner money too. That’s because of renewable energy technology. People are able to generate their own electricity close to home, and in communities where utility companies allow it, they can sell whatever they don’t use to the electric company.

Homeowners, farmers and businesses also are installing their own wind turbines, with the same benefits. Consumers are becoming producers and part of the energy marketplace.

Home-based solar and wind systems are good for the environment, good for local economies, and part of a larger global trend that relies increasingly on renewable energy resources.

California-based energy expert Angelina Galiteva calls renewable energy a “win-win-win” development. Renewables, she says, are “not only the lowest-cost alternative and the most environmentally benign alternative, but they are also the greatest job creator.”

Renewable energy resources — sun, wind, water and even garbage — are rich and inexhaustible sources of clean electricity and fuels. “The fuel price of solar and wind is not going to go up,” Galiteva says, because “the sun will come out. The wind will blow.” Now we need to build the infrastructure globally to take full advantage of these natural assets.

“Renewables are an empowerment tool,” Galiteva emphasizes. Because distributed energy generation is local, it strengthens communities around the world economically and socially.

Big business is coming on board

Apple, for example, is building its own microgrid, which will supply electricity to the company’s new Cupertino facility. “They are going to be generating 100 percent of their energy on-site, but they are going to be interconnected to the grid,” Galiteva says — so the excess energy they generate will flow into the general power supply. “They think it is exciting to participate in the energy market.”

Among utility companies, Pacific Gas and Electric is upgrading its facilities to meet the needs of California customers who are becoming energy producers. “I’ve seen the new distribution control centers for PG&E,” Galiteva says. “They are getting ready to become a distributed energy aggregator.” Which means PG&E will more efficiently combine and utilize smaller power sources — distributed energy resources — to meet regular demand.

It’s not just about environmental responsibility, it’s about income, creating jobs and becoming a good corporate citizen, Galiteva says, adding, “The fact that it is good for business is what really makes it work.”

Up next in Part Four: When it comes to renewable energy, will emerging economies be leaders?
Previously in Part Two: How is the transition to renewables being made?