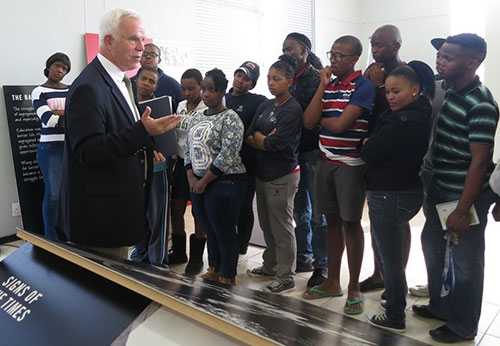 Students engaged Consul General Rowan on the issue of ethnicity and equality on a recent trip to Free State Province. He met with undergraduates at the University of the Free State Qwaqwa campus who participated in the First Generation (F1) student transformation program that took them to overseas institutions with similar experiences around tolerance and diversity issues. These students, who will oversee dialogues around the “Separate Is Not Equal” exhibition, had a meaningful discussion on race and education in the United States – past, present and future.

The historical debate of whether separate facilities could truly be equal was the topic of conversation with these bright students, followed by the official launch of the exhibition that underlines the 1954 U.S. Supreme Court decision which determined that racially segregated schools were unconstitutional. The legal case, known as “Brown vs. the Board of Education of Topeka, Kansas,” is one of the most widely known and significant judgments in the U.S. Supreme Court’s history, and its impact on American society and racial equality is hard to overstate. It overturned institutionally-sanctioned racism and inspired America’s civil rights leaders, who used its momentum to push for an end to many other forms of racial discrimination. The exhibition brings forth the parallels between the South African Apartheid laws and the American Jim Crow laws and their psychological effects on the oppressed.

The exhibition was originally put together and displayed at the Smithsonian’s National Museum of History in 2004 to mark the 50th Anniversary of the famous Brown v. Board of Education U.S. Supreme Court ruling on May 17, 1954. It was brought to South Africa in 2005, redesigned and contextually edited for South African audiences by the Apartheid Museum with financial support from the United States Government. To date, the exhibition has been displayed in eight other locations in the Western Cape, KwaZulu-Natal, Gauteng, the Free State and North West Provinces. The launch was well attended by government officials, academia, students and community leaders.