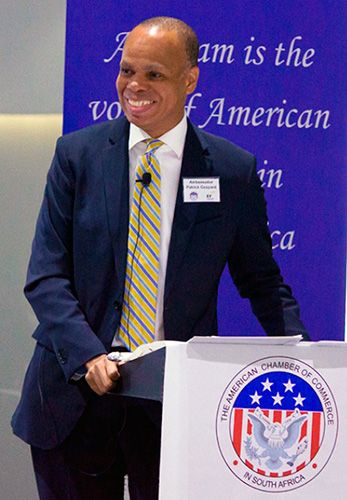 Thank you Jeff.  On these occasions, I’m reminded that your leadership is defined by both your incredible capacity and your generous spirit. Thank you for the kind words and this invitation to talk with friends.

It’s such a great pleasure to be with you all for this important launch. But I have to confess some embarrassment. I noted that my remarks are described in the program as a keynote address. That’s a bit too lofty for what will be a relatively brief talk intended as encouragement for your good investments in South Africa’s youth, and a talk sprinkled with only the simplest of wisdoms that you all have long arrived at.

Jeff, I think the best part of my job is that I get to be an unceasing cheerleader for the incomparable contribution of American companies to progress in South Africa. As a group, AmCham members go far beyond government mandated protocols on ownership, training, skills transference and community beneficiation. This is yet another example of that. Friends, since our Chair and MC is a Ford man, I think that I’ll use that great innovator Henry Ford as a thread throughout these remarks.

Ford once observed that “A business that makes nothing but money is a poor business.” You’re looking far beyond your bottom line and beyond the walls of your bricks and mortar firms. This project marks you as true partners in national development.

Many of your companies were also key participants in the recently held US/Africa summit which saw almost 50 African heads of state in engagement with President Obama and with leading American CEO’s. This forum was wildly successful because it represented a new model of partnership between America and Africa – a partnership that focuses on African capacity to solve problems, and on Africa’s capacity to grow.  It also generated commitments for $33 billion in new trade and investment from U.S. companies that will help spur African development and support tens of thousands of American jobs.

But as I consider your ambitious charge to drill down on education, entrepreneurship, and leadership development, – and as I ponder the considerable challenges that exist for young people in South Africa – I must say that I was most excited by what preceded the summit – President Obama’s Young African Leaders Initiative – A gathering of 500 of Africa’s brightest young professionals who came together after spending six weeks in leadership and professional training at universities around the U.S.  It was inspiring to connect with the 46 young South Africans who were representing this country.

Now I do know that quite often the demographic bulge of young people in Africa is described in worrisome tones. We know that there are 200 million young people in Africa between the ages of 15-24, and that a staggering 75 million of them are looking for work. And in this republic, of the 10.2 million individuals aged between 15 to 24 years, one-third are not in employment, education or training. Roughly 30 percent of male youth and 36 percent of female youth are disconnected from both the labor market and opportunities that promote future employability.

But when you’re with our YALI fellows you realize that cynicism about this generation is the wrong choice. You appreciate that the raw talent does exist here and it needs only to be resourced and heard. The energy, drive, and promise of these young leaders absolutely galvanized President Obama and convinced me of the merits of your initiative.

The gaping disparities in education and the unequal distribution of basic provisions can be overwhelming and one can sometimes be discouraged to take a first step because the road towards lasting, sustainable reforms can seem like a marathon.  And we know that it will take a multi-sectoral effort by government, private sector  and civil society to slay the dragon of steep unemployment and stagnant growth – and that those partnerships are always fraught with perilous negotiations.

And yet. And yet, the spark of innovation and creativity in the eyes of our YALI fellows swells me with a sense of great possibility.

One of those Fellows, Lerato Tshabalala, is the editor of TRUE LOVE magazine.  Her insights into the obstacles for women of color should give all of us pause.  She told us that “when a black girl enters the print industry, she doesn’t have enough examples of people of color who are in managerial positions – let alone women.”  So Lerato took up a Henry Ford mantra – “Don’t find fault. Find a remedy.”
Legato started her own mentoring program.

Another Fellow, Murendeni Mafumo, grew up in poverty in Limpopo Province, where substance abuse and gangsters were the norm.  He credits a teacher who trusted him with the keys of a science laboratory that gave him pride and the drive to prove her faith in him was not misplaced

Murendeni later finished at the top of his class at Cape University of Science and Technology and created a business to provide chemicals and water care for aquarium units.  His Mandela Washington Fellowship took him to Yale University, where he was impressed with technology apps, like See.Click.Fix, which help communities hold their governments answerable to providing services.  Citizens report non-emergency issues, and the company runs global analyses to see how cities respond to their citizens and improve the quality of life.

How do we help Murendeni develop a South African app to improve communities?

Yet another Mandela Fellow, Ntuthuko Shezi, I first met when we shared air time on a radio interview.  Shezi runs a vehicle repair business out of OR Tambo. Basically, travelers with dents in their cars park at the airport when going on trips, and Shezi’s teams repair the vehicles.  Right now he has eight employees and the business is growing.

Shezi sees entrepreneurship as philanthropy in itself.  At the end of a church service one Sunday, the pastor’s wife pulled Shezi aside and asked if he could help two boys in the parish find a job.  Shezi offered they could wash cars, then they moved to polishing, then they borrowed money from his company to get driver’s licenses and skills to learn about how to offer quotations for vehicle damage.  Now one of the boys, now a man, works for Hollard Insurance.  The other is now a car salesman.

These young leaders are all demonstrating a drive and ambition that we need to tap. Not just with a philanthropic instinct. It’s good for the sustainability of your own businesses. These are future middle class consumers and these are the Henry Fords of this new African century.

As you work to develop this project we need to all keep in mind two things. One is the value of failure. And the second is the importance of scalability.

Failure is a powerful tool in our kits. We have to coach young people towards impactful risk taking that can have tremendous yield. And we have to help them to embrace the notion that ultimate triumph is only achieved after the roughest stumbles. The hero of our story, Mr. Ford, would counsel that “Failure is simply the opportunity to begin again, this time more intelligently.”

Let us also own that we only do what we measure. This program needs to be tackled with the same brutal approach you all take with your quarterly production numbers. We need metrics and proof points on education outcomes, entrepreneurs grown and leaders groomed. And we need an effort that is incubated in regions where the greatest need lives alongside targets of opportunity.

Scalability matters as we appreciate that supply-side initiatives addressing structural issues are insufficient on their own to generate sufficient new jobs. Instead, these interventions must interface closely with demand-side incentive programs that create pathways up the management ladders in your institutions.

That’s exactly what the youth employment accelerator Harambee is doing.   They are developing a pool of work ready entry level recruits able to integrate into and perform in the workplace, retaining employment and with the ability to progress.  And they are matching them with employers like yourselves.  Several AmCham members are already working with them. Let’s encourage and build out these models, with exacting measures each step of the way.

Thank you for your forbearance through these remarks. And thank you for this collective stroke. This is a great start on a long assembly line.