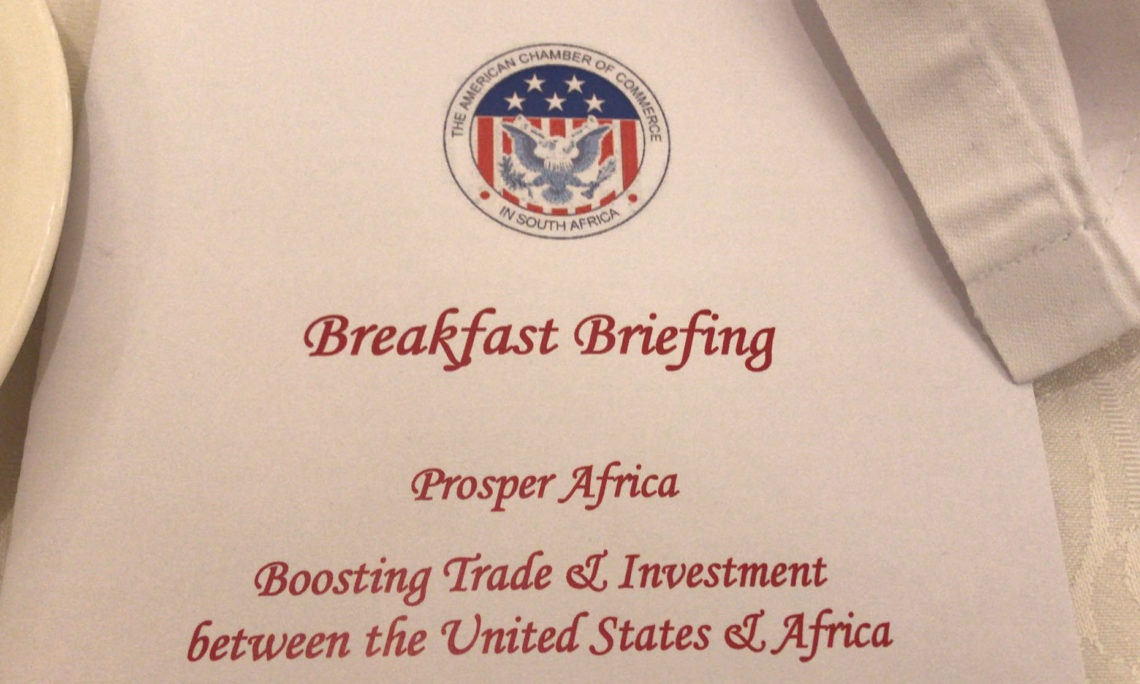 Thank you for the introduction and it is a pleasure to be with you today.  Although I have only recently arrived in South Africa, I have heard a lot about the economic and commercial opportunities in Cape Town and the robust American business community that is based here in the last few weeks as well as during my previous assignments on the continent.  So, I’m delighted to meet you and have the opportunity to talk about the Prosper Africa initiative.

Africa has long-received bipartisan support in the U.S. Congress and the continent has been the focus of some of our most important development and education programs:

At the same time, there was recognition that the commercial and trade opportunities in Africa were increasingly important to the U.S. private sector and for Africa’s progress.  There was also a need to transition our bilateral relationship with African countries from one based on aid to one based on trade, in part, because Africa has six of the ten fastest-growing economies in the world and more than 1 billion consumers.  Finally, there was a desire from the private sector for a whole-of-government approach to support U.S.-Africa trade.  From these objectives, Prosper Africa was born.

Prosper Africa is not a new program, but rather a commitment by the U.S. government to alter the way we do business and better support all of you in the private sector.  It capitalizes on the reauthorization of the EXIM Bank and the new Development Finance Corporation, which will have an investment cap of $60 billion dollars — double OPIC’s current capacity.  It aligns with Power Africa, which seeks enterprise-driven approaches to help expand power and electrification across Africa, and complements the Office of the U.S. Trade Representative’s intent to negotiate bilateral free trade agreements with African countries.  The President’s Advisory Council on Doing Business in Africa (PAC-DBIA) contributed to Prosper Africa’s design and goals by identifying a number of constraints that U.S. companies face in doing business on the continent.

We are enhancing coordination and creating a one-stop shop for U.S. and African businesses to access U.S. government services. We also aim to identify commercial opportunities in Africa for U.S. companies by consolidating and distributing information to U.S. companies.  We will assist companies with feasibility studies, financing, and risk mitigation tools to help facilitate transactions.  Finally, we will also build African countries and government’s capacity to encourage private sector-led economic growth while removing trade barriers that inhibit U.S. companies.

One element of Prosper Africa is the so-called Deal Team, which consists of representatives from 16 U.S. government agencies, supported by regional and Washington-based experts.  I’m so pleased to have representatives from some of our own Deal Team with me today.  You’ll hear from some of them shortly and I encourage to speak to them after our presentation if you haven’t already.  Our team is here to assist you whether you are looking at investments in South Africa or across the continent.

We know that U.S. companies offer a compelling value proposition for African countries.  U.S. companies bring significant capital, innovation, and proven solutions, and adhere to the highest standards of transparency, quality and corporate social responsibility.  Most importantly, your investments create jobs and new opportunities.  Prosper Africa is a mutually beneficial proposition. We want to facilitate deals and investment for you, which we know will advance African prosperity by expanding markets and fueling economic growth.

For South Africa, which as you know, is focused on investment and employment, U.S. companies are well-placed to contribute to these goals.  South Africa is also one of the largest and most developed economies in Africa.  That’s why I believe that South Africa and U.S. companies operating here will be critical to the success of Prosper Africa.  My team and I look forward to working with you.  And with that, I’d like to turn it over to my colleague and friend, Virginia Blaser, the Consul General in Cape Town.

Thank you, David. Many of you know me, but for those who don’t, I am Virginia Blaser, the U.S. Consul General in Cape Town.  As David noted, South Africa is one of Africa’s largest and most developed economies and will, therefore, be critical to the success of Prosper Africa.  Now, my position and role may make me biased, but I would add to David’s comments by saying the Western Cape offers so much potential to see the tangible results of Prosper Africa’s goals.  Again, I’m biased, but I think I can also prove that statement.  So, let me tell you why.

The Western Cape is a huge economy.  It has the 7th biggest per capita GDP in Africa and the 12th biggest overall GDP on the continent.

There is also a strong connection to the United States already.  All of you are proof of the dynamic and growing U.S. business community here.  I learn about a new U.S.-owned or operated business in the Western Cape nearly every week.  There are Americans opening businesses here, investing here, or entering into business partnerships here on a regular basis.  In fact, since 2003, the United States has led all other countries in capital expenditure for foreign direct investment into the Western Cape and has the second highest number of projects in the Western Cape.  Likewise, trade between the United States was worth $688 million last year—an increase of nearly eight percent from 2017.

The Western Cape economy is diverse.  Not many places can claim a robust tech sector and be a breadbasket.  Cape Town’s tech sector has created more jobs than Nairobi and Lagos combined and the Western Cape is the fifth largest exporter of agricultural goods in Africa.  There is also renewable energy manufacturing, tourism, a leading film and television industry, and numerous international conferences to name just a few.

The Western Cape also has a business-oriented government that is keen to facilitate investment and create jobs.  Cape Town is also increasingly positioning itself to be a gateway to Africa.

For these reasons, the U.S. government, like you, is also investing in the Western Cape.  We have funded electricity generation programs, renewable energy feasibility studies, small business loans, workforce development programs, ICT and Internet access grants in addition to our funding for educational programs and HIV/AIDS and other health programs.

This is what we have been doing in recent years, but the United States has been present in the Western Cape for a long time.  We’ve been focused on trade since the beginning.  Our first diplomat was sent here 220 years ago by President John Adams.  That assignment focused on commerce: the diplomat studied the local economy, reviewed regulations, and worked to encourage U.S. trade.  Likewise, I know that U.S. companies have a long present in the Cape provinces.  Ford — is there anyone here from Ford today? — has been operating from Port Elizabeth for a century.  From that strong foundation, we have had a number of exciting companies arrive here in recent years who are now mainstays within the Province’s economy.

As David noted, we hope the private sector will drive Prosper Africa and help determine where we focus our efforts.  I hope that we can work with you to make Cape Town and the Western Cape one of those focus areas.  My team and I at the Consulate General look forward to working with you and connecting you with the resources of the U.S. government.