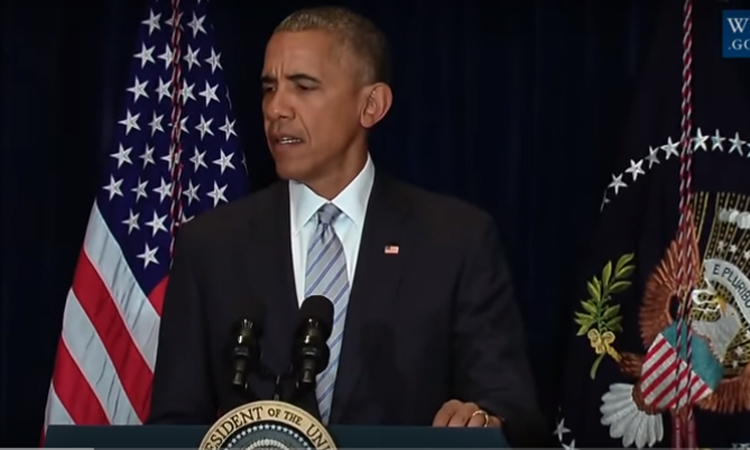 All Americans should be deeply troubled by the fatal shootings of Alton Sterling in Baton Rouge, Louisiana and Philando Castile in Falcon Heights, Minnesota. We’ve seen such tragedies far too many times, and our hearts go out to the families and communities who’ve suffered such a painful loss.

Although I am constrained in commenting on the particular facts of these cases, I am encouraged that the U.S. Department of Justice has opened a civil rights investigation in Baton Rouge, and I have full confidence in their professionalism and their ability to conduct a thoughtful, thorough, and fair inquiry.

But regardless of the outcome of such investigations, what’s clear is that these fatal shootings are not isolated incidents. They are symptomatic of the broader challenges within our criminal justice system, the racial disparities that appear across the system year after year, and the resulting lack of trust that exists between law enforcement and too many of the communities they serve.

To admit we’ve got a serious problem in no way contradicts our respect and appreciation for the vast majority of police officers who put their lives on the line to protect us every single day. It is to say that, as a nation, we can and must do better to institute the best practices that reduce the appearance or reality of racial bias in law enforcement.

That’s why, two years ago, I set up a Task Force on 21st Century Policing that convened police officers, community leaders, and activists. Together, they came up with detailed recommendations on how to improve community policing. So even as officials continue to look into this week’s tragic shootings, we also need communities to address the underlying fissures that lead to these incidents, and to implement those ideas that can make a difference. That’s how we’ll keep our communities safe. And that’s how we can start restoring confidence that all people in this great nation are equal before the law.

In the meantime, all Americans should recognize the anger, frustration, and grief that so many Americans are feeling — feelings that are being expressed in peaceful protests and vigils. Michelle and I share those feelings. Rather than fall into a predictable pattern of division and political posturing, let’s reflect on what we can do better. Let’s come together as a nation, and keep faith with one another, in order to ensure a future where all of our children know that their lives matter.

President Obama’s remarks on the police-involved shootings of Alton Sterling and Philando Castile:

“Good evening everybody. I know that we’ve been on a long flight, but given the extraordinary interest in the shootings that took place in Louisiana and Minnesota, I thought it would be important for me to address all of you directly.

And I want to begin by expressing my condolences for the families of Alton Sterling and Philando Castile.

As I said in the statement that I posted on Facebook, we have seen tragedies like this too many times.

The Justice Department has opened a civil rights investigation in Baton Rouge, and the governor of Minnesota has called for an investigation there as well. As is my practice, given my institutional role, I can’t comment on the specific facts of these cases; and I have confidence in the Department of Justice.

But what I can say is that all of us as Americans should be troubled by the shootings.

These are not isolated incidents. They’re symptomatic of a broader set of racial disparities that exist in our criminal justice system. And I just want to give people a few statistics to try to put in context why emotions are so raw around these issues.

According to various studies, not just one, but a wide range of studies that have been carried out over a number of years, African Americans are 30 percent more likely than whites to be pulled over.

After being pulled over, African Americans and Hispanics are three times more likely to be searched.

Last year African Americans were shot by police at more than twice the rate of whites.

African Americans are arrested at twice the rate of whites; African Americans defendants are 75 percent more likely to be charged with offenses carrying mandatory minimums. They receive sentences that are almost ten percent longer than comparable whites arrested for the same crime.

So that if you add it all up, the African American and Hispanic population, who make up only 30 percent of the general population, make up more than half of the incarcerated population.

These are facts. And when incidents like this occur, there’s a big chunk of our fellow citizenry that feels as if because of the color of their skin they are not being treated the same. And that hurts. And that should trouble all of us. This is not just a black issue. It’s not just a Hispanic issue. This is an American issue that we should all care about; all fair minded people should be concerned.

Now let me just say that we have extraordinary appreciation and respect for the vast majority of police officers who put their line on the lives every day. They have a dangerous job. It is a tough job. And as I’ve said before, they have a right to go home to their families, just like anybody else on the job.

And there are gonna be circumstances where they’re gonna have to make split second decisions. We understand that.

And to not have it to degenerate into the usual political scrum, we should be able to step back, reflect and ask ourselves what can we do better so that everybody feels as if they’re equal under the law.

Now the good news is that there are practices that we can institute that will make a difference. Last year, we put together a task force that was comprised of civil rights activists and community leaders; but also law enforcement officials. Police captains, sheriffs. And they sat around the table and they looked at the data and looked at best practices. And they came up with specific recommendations and steps that could ensure that the trust between trust between communities and police departments were rebuilt and incidents like this would be less likely to occur.

And there’s some jurisdictions out there that have adopted these recommendations. But there are a whole bunch that have not.

And if anything good comes out of these tragedies, my hope is that communities around the country take a look and say, how can we implement these recommendations?

And that the overwhelming majority of police officers, who are doing a great job every single day and are doing their job without regard to race, that they encourage their leadership and organizations that represent them to get behind these recommendations. Because ultimately, if you can rebuild trust between communities and the police departments that serve them, that helps us solve crime problems.

So it would be good for crime fighting and it will avert tragedy. And I’m encouraged by the fact that the majority of leadership in police departments around the country recognize this, but change has been too slow, and we have to have a greater sense of urgency about this.

I’m also encouraged, by the way, that we have bipartisan support for criminal justice reform working its way through Congress. It has stalled, and lost some momentum over the past couple of months, in part, because Congress is having difficulty, generally, moving legislation forward and we’re in a political season.

But there are people of goodwill on the Republican side and the Democratic side who I’ve seen want to get something done here. That too, would help provide greater assurance across the country that those in power, those in authority are taking these issues seriously.

So, this should be a spur to action to get that done, to get that across the finish line. Because I know there are a lot of people who want to get it done.

So let me just make a couple of final comments. I mentioned in my Facebook statement that I hope we don’t fall into typical patterns that occur after these kinds of incidents occur; where right away there’s a lot of political rhetoric, and it starts dividing people instead of bringing folks together.

To be concerned about these issues is not to be against law enforcement. There are times when these incidents occur and you see protests and you see vigils, and I get letters, well meaning letters sometimes from law enforcement saying, how come we’re under attack? How come not as much emphasis is made when police officers are shot?

So to all of law enforcement, I want to be very clear: we know you have a tough job. We mourn those in uniform who are protecting us who lose their lives. On a regular basis, I have joined with families in front of Capitol Hill to commemorate the incredible heroism that they’ve displayed. I’ve hugged family members who’ve lost loved ones doing the right thing. I know how much it hurts.

On a regular basis, we bring in those who’ve done heroic work in law enforcement and have survived. Sometimes they’ve been injured, sometimes they’ve risked their lives in remarkable ways. And we applaud them and appreciate them. Because they’re doing a really tough job really well.

But I repeat, if communities are mistrustful of the police, that makes those law enforcement officers who are doing a great job, and are doing the right thing, it makes their lives harder. So, when people say ‘black lives matter,’ it doesn’t mean ‘blue lives’ don’t matter, it just means all lives matter. But right now, the big concern is the fact that data shows black folks are more vulnerable to these kinds of incidents.

So let me just end by saying I actually, genuinely, truly believe that the vast majority of the American people see this as a problem that we should all care about. And I would just ask those who question the sincerity or legitimacy of protests and vigils and expressions of outrage who somehow label those expressions of outrage as quote unquote political correctness, I just ask folks to step back and think: what if this happened to someone in your family? How would you feel?

To be concerned about these issues is not political correctness, it’s just being American and wanting to live up to our best and highest ideals.

And it’s to recognize the reality that we’ve got some tough history and we haven’t gotten through all of that history yet. And we don’t expect that in my lifetime maybe not in my children’s lifetimes that all the vestiges of that past will have been cured, will have been solved.

But we can do better. People of goodwill can do better. And doing better involves not just addressing potential bias in the criminal justice system, it’s recognizing that too often we’re asking police to man the barricades in communities that have been forgotten by all of us for way too long. In terms of substandard schools, inadequate jobs and a lack of opportunity.

We’ve gotta tackle those things. We can do better. And I believe we will do better.

Thanks very much, everybody.”