Home Home / News & Events / What is the power grid and how does it work? 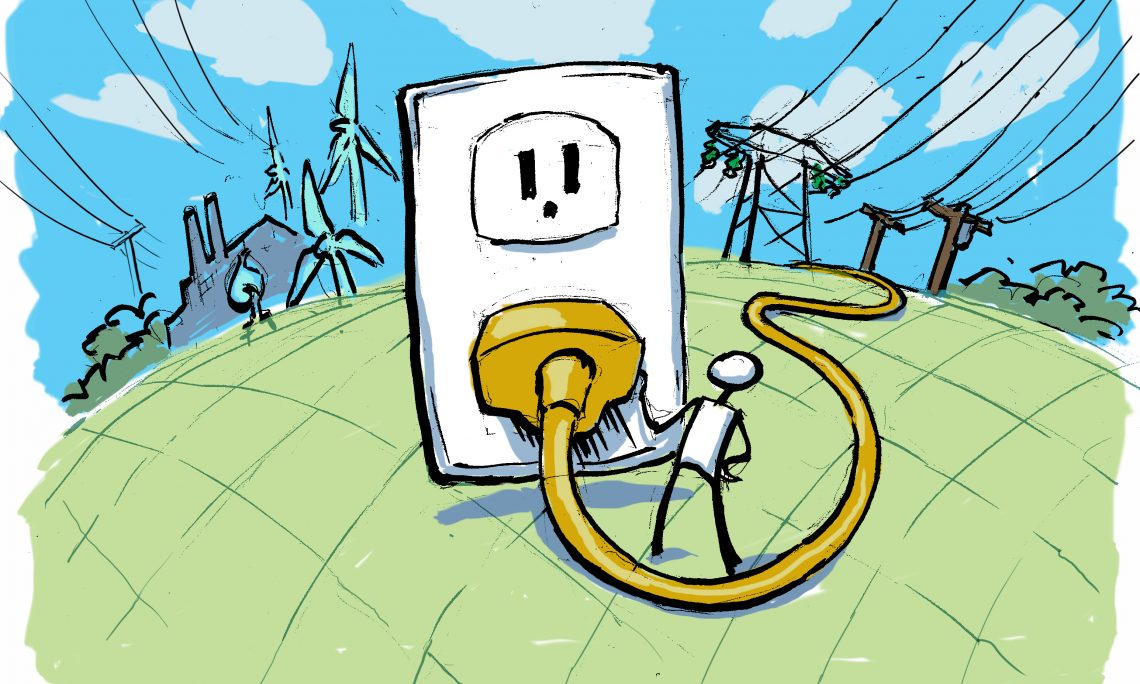 Everybody’s seen those tall towers strung with wires that stretch across the landscape. Most people know that those are power transmission lines, but they may not know they are looking at part of the power grid.

The power grid starts in the places where electricity is made. Once upon a time, electricity was generated only at central power stations, which usually ran off fossil fuels — coal or natural gas — or nuclear energy. Today there are more and cleaner options for energy generation. That’s a good thing, because fossil fuels release harmful greenhouse gases when they burn, which hasten global warming. And nuclear power plants use the metal uranium which, like fossil fuel, is nonrenewable and can be a dangerous environmental pollutant.

That’s why renewable energy is so important: Sun, wind and other renewable resources are inexhaustible and clean. They are also cheaper, because they generate electricity closer to home, which means fewer long power transmission lines and other expensive grid infrastructure.

After electricity is generated, it must be transmitted and distributed to consumers. The network of transmission and distribution facilities makes up the power grid.

Typically, electricity is transmitted at a very high voltage over the power lines that dot the countryside. The higher the voltage, the less current needed for the same amount of power, and thus less loss of electricity (resistance to current in the lines creates heat that causes some loss).

When the electricity reaches customers’ neighborhoods, transformers convert the high-voltage electricity to a lower voltage for distribution to homes and businesses.

When people use electricity for their lights, computers, appliances, heating and cooling they are drawing on the electrical grid. The total usage by customers is the “demand load,” which must be supplied by power providers. There are peak demand-load periods: at night when more lights are on, or the hottest or coldest times of day. Balancing those voltage loads is where power grid management becomes tricky, because the energy flow must be perfectly balanced at all times to provide exactly the right amount of electricity to customers.

Grid operators employ sophisticated mechanisms to increase or decrease power generation to match consumer demand. These mechanisms automatically monitor and dispatch electricity. This is “load balancing.” Electricity inputs from distributed energy resources are new power streams that grid operators are learning to integrate and balance with the demand load.

How renewables are changing — and charging — the grid

Small-scale distributed power producers — solar panels or wind turbines on or near homes or commercial buildings — generate electricity to be used on the premises. But if the grid is modern, or “smart” enough, these small producers can make money on their excess electricity.

Renewable energy technologies are changing power grids all over the world as the traditional centralized power grid is making room for energy innovations. The need to integrate distributed energy resources with the regular grid is spurring new ways to manage energy:

Microgrids distribute energy locally and can connect with the regular grid or not, depending on the circumstances. If there is a power outage on the regular grid, a microgrid fed by nearby distributed energy resources can keep the lights on. It can also be independent of any big power system — useful in remote areas because minimal infrastructure is required.

Energy storage technology helps integrate intermittent renewables such as solar and wind into the power grid, saving excess energy generated during daylight hours or on windy days for use later. High-capacity batteries and other sophisticated technologies have been introduced, and more are being developed.

“Smart” meters allow communication between the consumer and the utility company so the utility can monitor usage and be alerted to outages. Some smart meters can monitor the electricity generated by small-scale energy producers, so the excess energy they feed into the grid may be credited, to be claimed later when they need it.

The grid will continue to be central to the future energy system. According to a 2014 report by the GridWise Alliance for the U.S. Department of Energy, both central and distributed energy will be part of a grid that is more flexible — and smarter than it is now. Instead of supplying one-way electricity, it will allow power to flow both ways. And fewer people will be deprived of electricity, no matter where they live.