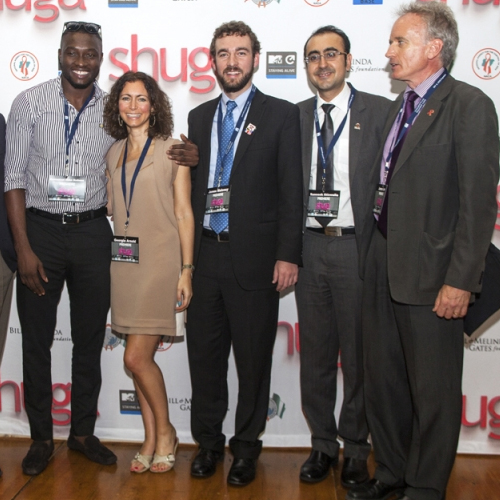 During the week of the International Conference on AIDS and STIs in Africa (ICASA) 7-11 December 2013, Team Shuga, courtesy of the MTV Stay Alive Foundation visited Cape Town for the South African premiere of Shuga.

Set against night clubs, bars and student hangouts of Lagos, Nigeria, the MTV drama series Shuga relates a bitter-sweet tale of love, betrayal, relationships and heartache among a group of friends in the city of Lagos.

Just like the Lagos and London audiences, there was a bunch of very excited people at the South Africa launch. But the Cape Town event was a little different.

After landing in Cape Town, Team Shuga and the MTV Stay Alive Foundation travelled over 32 kilometers out of the city center to Eerste River to meet a community whose lives have been impacted by Shuga in extra-special ways thanks to PEPFAR partner – the University of the Western Cape.

Led by Professor Jim Lees, the University of the Western Cape equips the students to use Shuga in their communities to drive vital HIV-prevention messaging, encourage conversation around sexual health among families, and tackle the stigma associated with people living with HIV.

The night began with a powerful tribute to former South African President Nelson Mandela, where hundreds of people gathered in the community hall united in song and prayer.

As images of Mandela smiled over the audience from the community hall screen, MTV Base’s Sizwe Dhlomo took to the stage to begin the very special night. With Emmanuel Ikubese (who plays Femi in Shuga) watching from the audience, Sizwe introduced Team Shuga to three members of the Eerste River community: Ashton, Nokuthula and Alice. Ashton told of how he has used Shuga with his friends and family, followed by an emotional Alice who said that Shuga has allowed her to talk openly with her family and children in ways she’s never been able to before. Nokuthula had even been using Shuga in the local prison to educate the inmates.

Before the screening started, some of the events’ biggest supporters, Mark Dybul from the Global Fund and James Maloney from the United States government (PEPFAR) made presentations, both pledging their continued support for Shuga.

MTV Staying Alive Foundation’s Georgia Arnold took to the stage for the moment the audience had all been waiting for—Shuga Naija. Gasping at the drama of the Femi-Ekene fight, hissing as Solomon infamously reaches for his ARVs (antiretrovirals), and laughing as Sophie tries (and fails) to flirt her way to study success, the only part the Eerste River community weren’t entertained by were the rolling credits of episode two marking the end of the night.

Before the community joined together again in song and prayer, Nonkosinathi Novukela stood before the Eerste River community to remind the 500-strong audience that as a young, beautiful woman who just happens to be living with HIV, she has nothing whatsoever to be ashamed of.