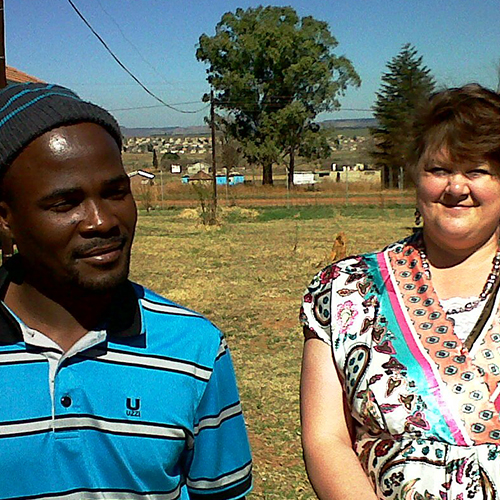 Mduduzi Yende was a nervous man, afraid to test for HIV when he first met Nurse Mentor Elza Marx at the Amsterdam Community Health Centre in Mpumalanga.

A person needs to spend only a moment speaking with a staff member at the Amsterdam Community Health Centre (CHC) or one of the 1,430 patients currently receiving antiretroviral therapy (ART) at the facility to understand the benefits of Nurse Initiated and Managed Antiretroviral Treatment (NIMART). Caring nurses like BroadReach’s Nurse Mentor Elza Marx tops the chart.

Thanks to assistance from PEFPAR, the ability for nurses to initiate HIV-positive patients onto ART and mentor other cadres of healthcare professionals has irrevocably changed not only HIV and AIDS services offered in facilities like Amsterdam throughout South Africa, but also the hearts and minds of countless patients receiving this vital care.

Situated in rural South Africa, less than 20 kilometres from the Swaziland border in eastern Mpumalanga, Amsterdam CHC serves a population of approximately 24,000 people; with 3,000 to 4,000 patients visiting the facility each month.

Part of BroadReach’s assistance to the CHC included temporary bridge funding for key staff in positions to support the Department of Health’s human resource needs. These positions have now been absorbed on a permanent basis by South Africa’s Department of Health. BroadReach Healthcare’s temporary support; Nurse Marx was able to attend one of the first NIMART courses at Stellenbosch University.

Upon completion of training and in an effort to leverage her expertise and skill set, she transitioned into a mentorship role to support other nurses in their treatment efforts. To date and across 2 sub-districts, Nurse Marx has mentored 66 professional nurses who have gone on to initiate 2,467 patients.

In addition to nurse mentors, she has mentored 26 lay counselors, 11 enrolled nurses, and 10 administration/data clerks. Truly her mentorship efforts are lending to improved patient care and efficiently run facilities. USAID and BroadReach together are building the capacity of the Department of Health and enabling the effective initiation of thousands of patients in Gert Sibande District.

As Amsterdam is located nearly 50 kilometres from the nearest hospital, Nurse Marx’s NIMART training and mentorship work has allowed many at the CHC to access treatment who had previously been unable, due to monetary, time or transport constraints. In large part due to PEPFAR assistance via USAID’s partnership with BroadReach Healthcare, two such patients who have enjoyed life changing medical attention are Mr. Mduduzi Yende and *Mrs Khumalo.

Mduduzi Yende has firsthand knowledge of Nurse Marx’s impact in Amsterdam. Mduduzi was diagnosed with HIV when he first met Nurse Marx. He arrived at the CHC with night sweats, pain and vomiting. Mduduzi was afraid to test for HIV. Nurse Marx encouraged him to learn his status and even visited him at home, providing comfort and support, whilst informing him that the diagnosis was “not the end of the road”.

At the time of initiation in March 2010, Mr. Yende was co-infected with extra-pulmonary tuberculosis (TB) and reported a CD4 count of 349.

Today, Mr. Yende is healthy and doing well on ART with an undetectable viral load and CD4 count of 350. Influenced by his experiences with Nurse Marx and other mentees of Nurse Marx, Mr. Yende now works with a leading NGO, Treatment Action Campaign, advocating for the rights of those impacted by HIV/AIDS. He promotes male medical circumcision (MMC) and HIV Counseling and Testing (HCT) among men in his town. He desires to reach his entire community with relevant HIV information, because, as he says “if you are not infected, you are affected.” Nearly at death’s door, Mr. Yende is now a vibrant, vocal community activist for prevention and treatment, and a shining example of survival and triumph over a very grim diagnosis!

Mrs. Khumalo’s* story is one of hope amid heartbreak and the importance of caring, intervening medical professionals.

In 2008, Mrs. Khumalo brought her 15 year old son to Nurse Marx to find out why he was inexplicably sick and losing weight. Nurse Marx examined the young boy and, given his symptoms, recommended he be given an HIV test. Unfortunately, he tested positive and not long after, died of complications from taking both traditional medicines and ARVs.

As if the misfortune of losing her only son was not enough, Mrs. Khumalo returned to the CHC a few years later; she was also feeling ill with worrying symptoms. She was immediately diagnosed as HIV-positive in January 2010. Although eligible for ART, her husband, Mr. Khumalo*, demanded she be treated by a traditional healer and initially refused to allow her to take ARVs.

Through much persuasion, Nurse Marx was able to convince Mr. Khumalo to agree to let his wife take ARVs, and also convinced him to take an HIV test. Despite testing positive with a very low CD4 of 56, Mr. Khumalo refused ART. He preferred to take traditional medicine, in spite of being seriously ill.

When Mr. Khumalo’s CD4 dropped further, Nurse Marx intervened with the help of a fellow clinician, and the two helped Mr. Khumalo to see the benefits of treatment and understand that he would die without ART.

Today, both Mr. and Mrs. Khumalo are on ART and are living healthier lives. Mrs. Khumalo greatly admires Nurse Marx, grateful that her diligent dedication has saved both her and her husband. “She [Nurse Marx] has helped a lot of patients here. She gives her time to the patients. She loves the patients.”

Recognizing the important roles that prevention, treatment and adherence efforts have in the wellbeing of her community; Nurse Marx currently mentors numerous other healthcare professionals. She hopes that all clinics in the province will soon be able to offer NIMART and have BroadReach Healthcare mentors in their facilities to further support the thousands requiring life saving treatment.

*Name has been changed.